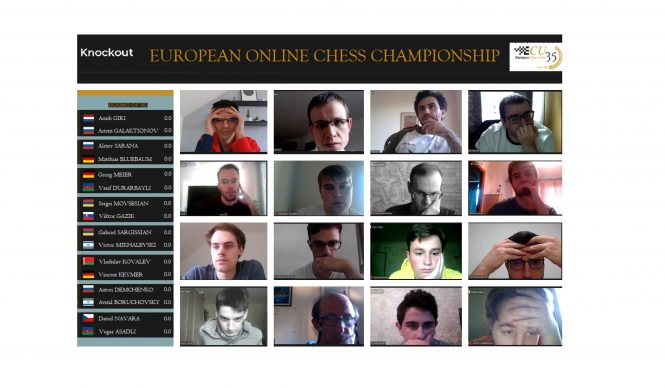 GM Sarana Alexey was the Winner of the 1st Grand Prix event for E group with score of 7.5 points, and placed 4th in the 2nd Grand Prix event for E group with 6.5 points. After the finish of the super-final match against Navara David, Sarana was interviewed in Chess.com TV Studio with commentators of European Online Chess Championship WGM Keti Tsatsalashvili and GM Roeland Pruijssers, and emphasized: “I am very happy that this tournament was organised, because we, 2600 players, don’t have many chances to play and win some prizes.”.

Report of Chess.com on European Online Chess Championship, altogether with all games from the Final Top16 Knockout Stage is available here.

The pairings/results tree of Top16 Knockout:

Grand Prix events of E group were played on 29th and 30th of May, and the combined standings can be found here.

Based on combined results of group E, Batsiashvili Nino (GEO) took a title of European Women Online Chess Champion, scoring 10 points from both events. Second place went to Shuvalova Polina (RUS) with 9.5 points, who had better ties than Daria Voit (RUS) with the same score of 9.5 points.

Both GrandPrix events of Group E, as well as the knockout Top16 were LIVE broadcasted in chesscomTV.

PGN file of 1st Grand Prix event for group E played on 29th of May can be downloaded here:
PGN 1st Grand_Prix- group E 29th of May

The Winners of A category were:

Full Prize list for A group participants can be found here.

The Winners of B group are:

Full prize list for B group participants can be found here.

The Winners of C group are:

The Winners of D category are: