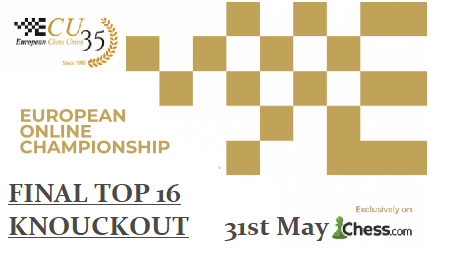 Final phase of European Online Chess Championship at chess.com platform will be played today, starting from 17:00 CET. Top ranked 14 players from E Group (2300+) Grand-Prix qualified for the Knock-out finals, and 2 invited players are going them to the top 16 list.

The Two invited players which will compete in the final Knock-out are: Gms Anish Giri (NED) and Navara David (CZE). Top 14 players according to combined score of two GrandPrix E events are:

Full list with combined scores and ties from both events can be downloaded here.

Pairings tree of the Knockout Finals:

The Knockout event will be played with time control 10min+2seconds, in two games matches. If the match is tied after 2 played rounds, Armageddon game follows, and the colours will be decided by drawing of lots.