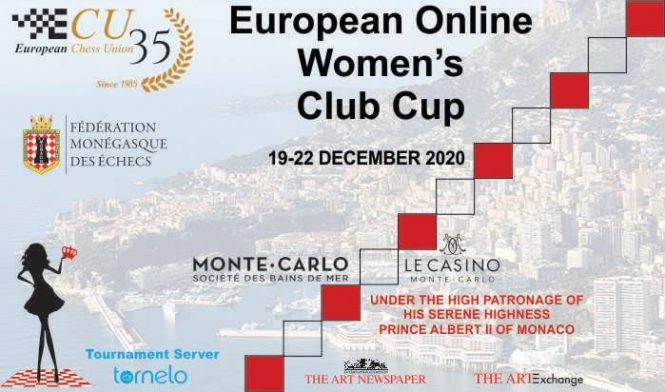 European Online Women’s Club Cup starts on Saturday 19th of December and will be played till 22nd of December 2020, through playing platform Tornelo.

42 teams will participate the event, separated to 5 groups: A, B, C, D and E, according to the average classic rating of 4 basic players with December 2020 FIDE rating list taken in account:

The event will be played within two stages: Qualification and Final.
Qualifications will be played on 19th and 20th of December, as Round Robin events and the first two teams of each qualification group will qualify for Final Group which will consist of 10 teams. The time control is: 15min + 5 sec per player.

Final group will be played on Monday and Tuesday, 21st and 22nd of December, in 9 rounds, Round Robin system.

Starting rank list of players and teams can be found here.

ECU Certificates will be available for all Teams and players.

The event is organised by European Chess Union and Monte Carlo Chess Club, under the high patronage of his serene highness Prince Albert II of Monaco.

Official regulations of the event can be downloaded bellow.