The 28th International Chess and Games Festival Czech Open 2017 started on July 13th and will last until 30th of July. As usual, the event takes place in hockey Tipsport arena in Pardubice. The very first tournament of Czech Open was really successful. 131 teams made of four players have participated Cesky Lev Kolesovice Open.  “We are very happy to have 131 teams in this tournament and this is our new record. There are traditionally very strong players and teams,” said the director of festival Jan Mazuch. This tournament is also played as Championship of Czech Republic.

After seven rounds gold medals went to Czech team “Zikuda Turnov” who won the competition for the forth time in a row. The second place went to team “Imenitni” from Slovenia, and the bronze to team “With no mercy” from Ukraine. The best player of the event was Czech player GM Petr Neuman who scored 6.5 points out of 7 games among the very strong competition of 6 GMs. The first weekend of the event was traditionally dedicated to the games- tournaments in various disciplines, such as: Scrabble, Gomoku, Mancala, Go,  and many others. After the weekend the other chess tournaments were proceeding- bughouse, blitz chess, superblitz and blitz marathon. One of the most popular event was the Fischerrandom chess tournament with GM David Navara and GM Mikhail Krylov. The Winner of this tournament became Russian Mikhail Krylov. Another star-studded tournament will be the two-day rapid-chess tournament, which started on wednesday. The event will participate 28 grandmasters, top seeded will be GM Sergei Movsesian and GM Maksim Chigaev. 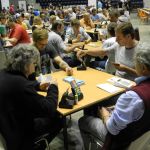 Czech Open Festival draws to a phase, when the competitors taking part in the main tournament meet in the Tipsport arena. This tournament will begin on 21th July and continue up to the 29th July.

The results of all the tournaments and games are available on the Official Website of the event.