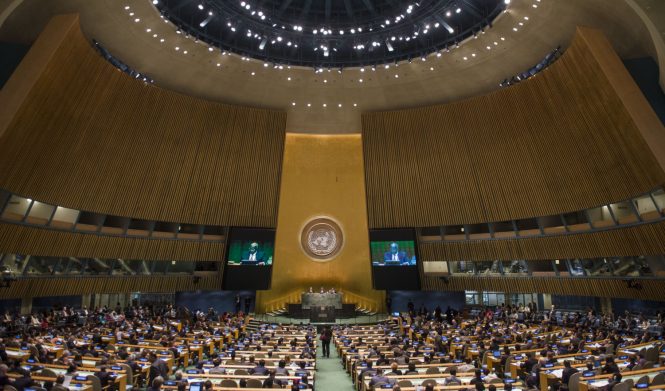 UN General Assembly on 12 December 2019, by consensus decision adopted the resolution tabled by the Armenia’s permanent mission and co-sponsored by several countries designating the 20th July as World Chess Day, marking the date in 1924 when the International Chess Federation was established in Paris.  Introducing that draft, Armenia’s delegate observed that the game can transcend national boundaries and break down racial, political and social barriers.  Armenia, he added, has one of the highest numbers of chess grandmasters per capita in the world, having embraced chess as an academic subject in schools.  “One of the most important and enduring lessons that chess can offer is teaching respect,” he said.

The UN acknowledges the important opportunities offered by chess, including, inter alia, in strengthening education, realizing gender equality and the empowerment of women and girls, and fostering inclusion, tolerance, mutual understanding and respect.

The UN invites all member states, international and regional organizations, the private sector and civil society to observe World Chess Day in an appropriate manner and in accordance with national priorities, and to disseminate the advantages of chess, including through educational and public awareness-raising activities.

The official Press release by UN.