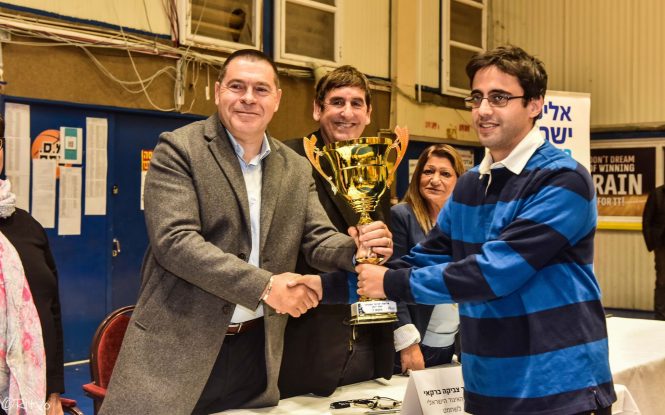 The Israel open championship was held on December 8-16 2021 in the old northern city of Tzfat (Safed) by the Israel chess federation, under the auspices of the local municipality and Mifal Hapais (the national lottery).

102 players, including 9 GMs and 9 IMs competed in 9 Swiss rounds  for the top honours as well as for the 80,000 NIS prize-fund. 4 members of the national team led the starting rankings being the natural favourites: GMs Tamir Nabaty, Ilya Smirin (both former Israeli champions), Victor Mikhalevski (The current champion) and Evgeny Postny (former winner of the open championship). Quite a few of the country’s best junior players were among the participants too led by IMs Or Bronstein, Yair Parkhov and Ido Gorshtein.

They were followed by GMs Ori Kobo, Victor Mikhalevski and Israel Caspi, IMs Ido Gorshtein and Or Bronstein and FM Yotam Shohat on 6.5 points each. Best u- 18 was FM Yeshaaiahu Tzidkiya on 6. GM Avigdor Bykhovsky was declared best senior, while the best female prize was awarded to WCM Ronit Levitan -both on 5.5 .  28 players in total shared the money prizes in all categories.

The event was smoothly and skillfully run by director Olga Volkov and the arbiters team led by IA Alon Shulman. Shaul Weinstein, deputy chief arbiter, was in charge of the official website and the live broadcasting of the games.  School championships and simultaneous exhibitions took place in the city during the tournament. Another peripheral city has been hopefully captivated by the charm to start a new chess community with a fine new chess tradition.

The full results may be seen here.