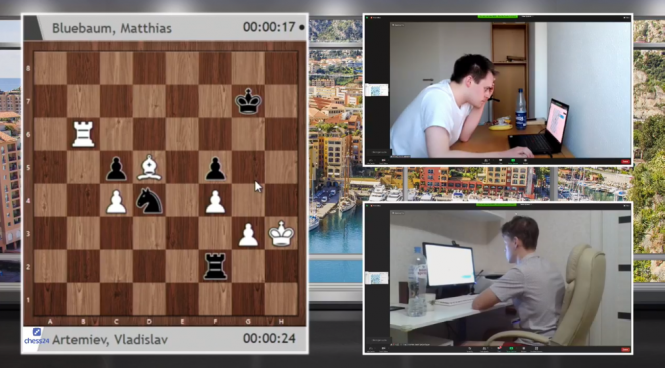 91 teams participated in the event and 18 teams proceeded to Play-offs. The best 10 teams of Play-offs qualified for the Final phase which took place from 30th-31st March and decided the Winners of the event!

Team of SF Deizisau e.V. scored 14 match points to be the sole Winner of the event, while second place came to Clichy Echecs 92 from France with 13 match points. Two teams tied for the bronze medal with a score of 11 match points, each: Mednyi Vsadnik (Russia) and Poland Hussars (Poland), but according to board points, Mednyi Vsadnik took third place.

Special prize “Vasily Smyslov” is awarded to a winner of the best game of the tournament! The Winner of the prize is Artemiev Vladislav who won Bartel Mateusz! The game can be seen here.

1st Board the best players:

2nd Board the best players:

3rd Board the best players:

4th Board the best players:

All the results and standings can be found here.

The Closing Ceremony of the event will take place on Friday, 2nd of April, starting from 17:00 CET and will be broadcasted through the ECU Twitch channel and through the European Chess TV Youtube channel.

All the rounds and games of the event were broadcasted live from the ECU LIVE studio, together with commentaries by WGM Keti Tsatsalashvili and her special guests: ECU President Zurab Azmaiparashvili, ECU Vice Presidents: Adrian Mikhalchishin, Dana Reizniece-Ozola and Eva Repkova.