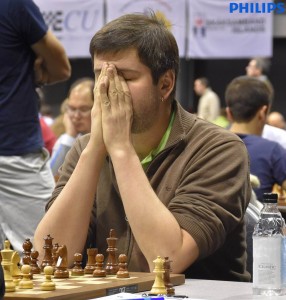 What a day for the Russian teams in Reykjavik! In both sections we had the clash between the top two seeds in the tournament today and the matches didn’t disappoint. In the open section the Russians cruised to a 3-1 victory against Ukraine, while in the women’s section they beat Georgia with a merciless 3.5-0.5 score.

In the Ukraine-Russia encounter, it was Peter Svidler who drew first blood as he punished a dubious move choice by Vassily Ivanchuk.

He was soon followed by Nepomniachtchi, who after being the match winner yesterday continues his good run here in Reykjavik. Grischuk finally made his debut and drew his game against Eljanov, as did Tomashevsky against Kryvoruchko.

Seeing as the board 2 match between France and Serbia ended in a 2-2 draw, Russia already has a 2-point lead after 4 rounds.

After 4 rounds, Russia is the sole leader on 8 points, and they are followed by as many as 7 teams on 6 points. Tomorrow we can look forward to another big clash as the Russians face title defenders Azerbaijan!

As already mentioned, the Russian ladies created the surprise of the day, as they scored a fantastic 3.5-0.5 victory against top seed Georgia! Only Nana Dzagnizdze could draw her game against Alexandra Kosteniuk on the first board, while Lagno, Gunina and Goryachkina all cruised to victory.

On board 2, France scored an important 3-1 victory against Romania, while on board 3 Romania beat Germany with the narrowest margin.

So just like their male colleagues, the Russian ladies are the sole leaders with 8 points, but France and Romania are hot on their heels with 7 points. And three of the strongest teams of this competition follow them on 6 points: Georgia, Ukraine and Poland.

Tomorrow Russia will face France on the top board, while Romania takes on Ukraine and Poland is paired against Ukraine. 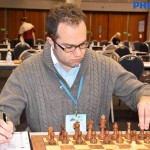 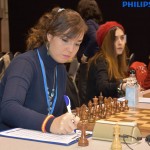 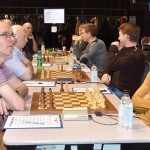 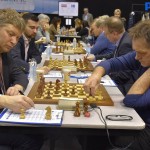 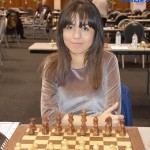