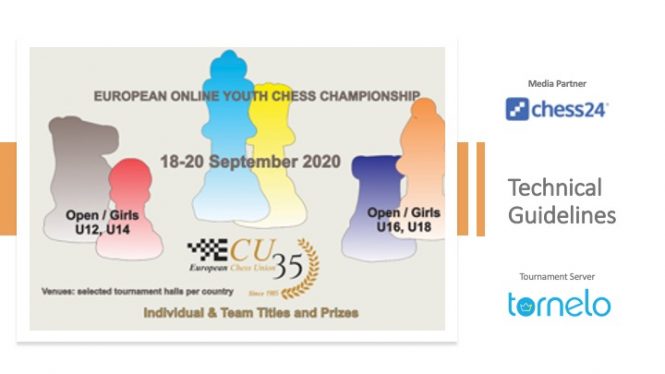 European Chess Union is delighted to announce “Chess24” as Media Partner and Live Broadcaster and the Online Platform “Tornelo” specialized in Event Management as the Tournaments server. The technical guide of the new type hybrid chess events is attached.

Deadline for registrations by National #Chess Federations is the 4th of September.

A number of European Chess Federation have been already confirmed their participation with their champions. Attached you can find also the initial information about the two training camps that included in the prize list of the European Online Youth Chess Championship.

Additionally, through the EOYCC will be made the selection of European Youth Team (16 players, 2 per age group) that will play matches with continental teams from Africa, America and Asia on 10th October under the frame of 6th Global Chess Festival organised by the Judit Polgar Chess Foundation.

Information about the EOCC2020:

Deadline for registrations: 25th of September.