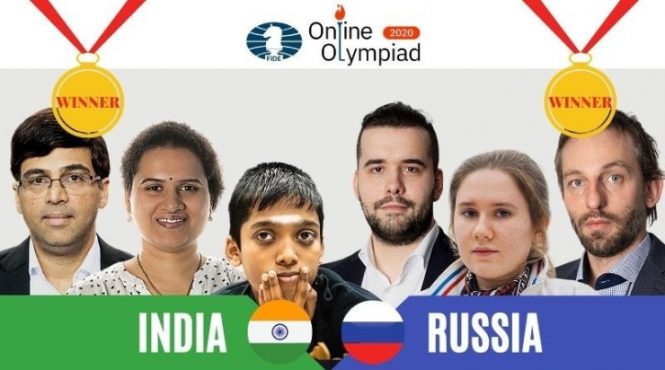 Finalists of the event India and Russia played a two matches to determine the Winner of the 1st Online Olympiad. After the first match ended in a tie with score 3-3 and draws on all the boards, the second match started again in peaceful manner with three draws.

Two of the Indian players, Nihal Sarin and Divya Deshmukh, lost connection towards the end of the game, subsequently losing on time against Esipenko Andrey and Shuvalova Polina.

According to regulations of the event, Russia was announced as the winner of the match with a victory 4.5-1.5.

However, as soon as the last game of the match has ended, India appealed the match result on the grounds that their players (along with hundreds of other users) were logged out of Chess.com as a consequence of a massive internet outage at the time of the games.

The Appeals Committee examined all the evidence provided by Chess.com, as well as information gathered from other sources about the Cloudflare crash that caused the outage. After being informed of their considerations and in absence of a unanimous verdict, the FIDE President made the decision to award Gold Medals to both teams.

“The Online Chess Olympiad has been impacted by a global internet outage, that severely affected several countries, including India. Two of the Indian players have been affected and lost connection, when the outcome of the match was still unclear. The Appeals Committee has examined all the evidence provided by Chess.com, as well as information gathered from other sources about this internet outage. After being informed of their considerations and in absence of an unanimous decision, and taken into account these unprecedented circumstances, as FIDE President I made the decision to award Gold Medals to both teams.”

The event was LIVE transmitted together with live commentaries of Top World Chess players such as: Vladimir Kramnik, Anish Giri and Teimour Radjabov.