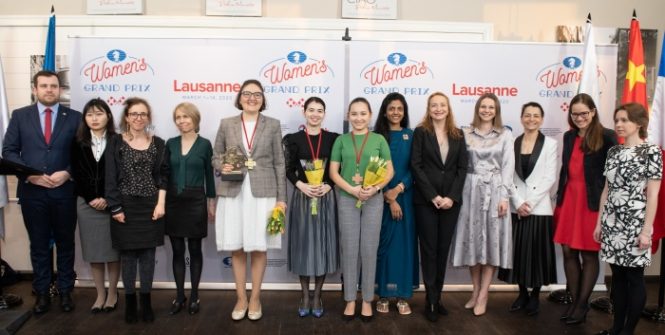 After very intense finish of the FIDE Women’s Grand Prix Lausanne in Switzerland, Nana Dzagnidze (GEO) claimed the title of the Winner, thanks to better tiebreaks than Aleksandra Goryachkina (RUS), who won silver medal.

The Winner was decided in the last 11th round of the event, since leaders of the 10th round, Nana Dzagnidze and Aleksandra Goryachkina, played against each other for the top. The game ended in a draw, and with score of 7 points each, the Winner was decided by tiebreaks criteria.

Abdumalik Zhansaya (KAZ) had a chance to join the leading duo if she had won the last game, but with a draw, she scored 6.5 points and took bronze.

After the 3rd stage of FIDE Women’s Grand Prix the standings are:

The last event of the Women’s Grand Prix Series will be played from 2nd-15th May in Sardinia.