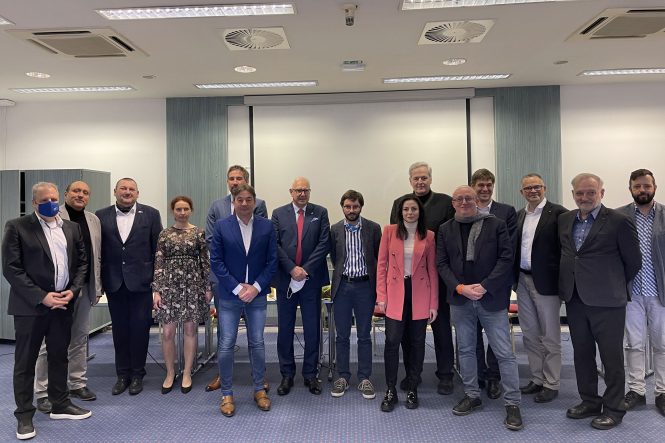 The statutes were signed by the representatives of the federations. Marco Biagioli (ITA) was elected as the first President of the Association, Nina Rob (SLO) as Vice President and Luigi Maggi (ITA) as Treasurer. Walter Kastner (AUT) was appointed Secretary General. The headquarters of the association is in Vienna, Austria, where the Mitropacup was founded.

The Chess Mitropacup is an idea of the Austrian International Arbiter Gertrude Wagner. She wanted to create a tournament for teams in the center of Europe, as it was common in soccer. Kurt Jungwirth, President of the Austrian Chess Federation from 1971 to 2017, recognized the chances of this idea and said: “Ok, let’s organize a Mitropacup”.

The first Mitropacup was held in Innsbruck in 1976. Germany won the premiere ahead of Switzerland and Yugoslavia. This year, Switzerland organized the 39th Mitropacup in a hybrid online format for the first time due to the pandemic. The 40th Mitropacup will be held in France in 2022 and will hopefully be possible on the board again.

A project that shows how the MCA can cooperate in the future is the Erasmus plus project “CUPS”, submitted in June 2021. “Chess unites and promotes skills” will, if the application is positive, bring chess into schools as a compulsory subject. The focus is on the German “Bremen Model”, in which teachers and children learn chess together in a weekly lesson. Regardless of the children’s age, chess can teach better concentration skills, more patience and perseverance, a greater sense of creativity, better intuition, better memory, and better analysis and decision-making skills. In addition, children and young people can learn determination, motivation and fairness through the game. In addition, chess promotes social inclusion. This includes, in particular, students from immigrant backgrounds, students with socioeconomic difficulties, and also students with physical disabilities.

The MCA has agreed in its statutes to work more closely together and to agree on common values. Chess is sport, but also a means to promote friendship, culture, common values such as sportsmanship, gender equality, integration and social improvement.