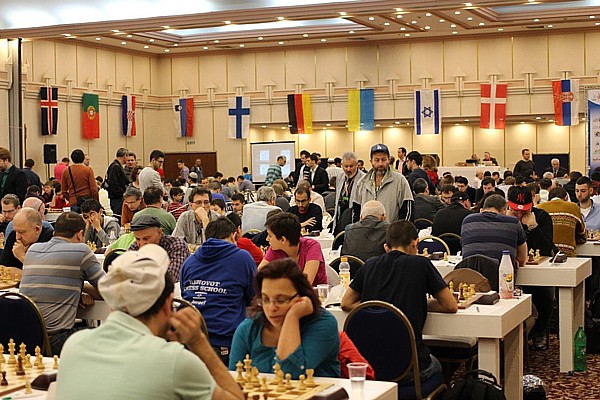 Three major upsets were scored in the fifth round of the European championship when three experienced grandmasters were beaten once again by young Israeli players. Israeli Alex Khuzman by Omer Reshef, another Israeli Dan Zoler  by Matan Gorodetsky (more than 300 Elo points lower) and Russian Mikhail Antipov by Jonathan Bakalchuk (more than 250 points lower). 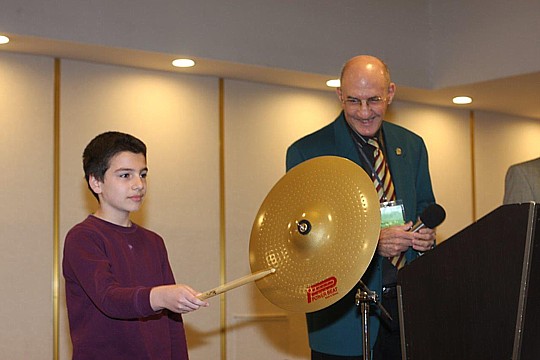 Look who is hitting the gong: It’s no other than Michael Tal. A practical joke? Not quite! The young son of tournament director Rami Tal happens to have the same name as the eighth world champion.

Last Saturday was the first of two free days and most foreign guests joined the excursion to Masada and the Dead Sea we have already reported about. The general enthusiasm from this highly enjoyable experience definitely had a positive influence on the fighting spirit, however not on the number of decisive games in the fifth round.

On the first 20 boards only five  games were decided including the loss of the highest Israeli player in the tournament Maxim Rodshtein against Russian Alexander Shimanov. The Ukrainian Anton Korobov drew his game with Czech David Navara but owing to the multiple draws among the runners up he still kept the lead though not with a perfect score anymore.

Following the fifth round Korobov was still leading with 4.5 points, ahead of not less than 15 grandmasters with 4 points.