The second round of the European chess championship in Jerusalem already brought together a great deal of the 112 participating grandmasters and therefore no sensational upsets were witnessed, at least not of the kind we saw in round one. In the end of round two 25 GMs and a single IM were on perfect score. Russian GM Alexander Motylev, the current European champion, won both his games by then however the other six past champions already dropped half a point each.

The guest of honour of the day was Israel’s No.1 Boris Gelfand who joined the team of commentators for a short session. He evaluated the top boards and answered a couple of questions by the interviewer GM Alon Greenfeld. Gelfand expressed his positive view about the spacious venue and the decent playing conditions and even referred to the question that many have raised: Why doesn’t he take part in the European championship? He said that he had indeed considered his participation, however the series of top tournaments he had played in the end of last year and the super tournaments he is invited to starting from the upcoming April demand a serious time out for recuperation and revision of his theoretical repertoire.

Yesterday, in the third round a couple of sharp and fascinating battles were witnessed which left at the end of the day just five grandmasters with a perfect score: Navara (Czech Republic), Y. Vovk and Korobov (Ukraine), Najer (Russia) and Lupulescu (Romania). Not less than 37 players had dropped just half a point each.

A special guest was yesterday GM Alik Gershon who replaced GM Ronen Har-Zvi at the live commentary studio. He plays very little these days however the local chess community still remembers his double world junior championship title (for u-14 in 1994 and for u-16 in 1996) as well as his magnificent world record for simultaneous display in 2010 when he played in the centre of Tel-Aviv against 523 opponents at the very same time.

The fourth round will start this morning in hotel Ramada. Games will be transmitted by the official website and will be explained in the live internet show by the team of chess.com and the commentators GMs Alon Greenfeld and Ronen Har-Zvi. The leading games Navara- Najer; Lupulescu-Korobov and Vityugov –Vovk are expected to attract special attention.

Tomorrow Saturday there will be no games and the participants will be invited to an excursion to Masada and the Dead sea.

The championship has enjoyed unprecedented media interest with both national channel 1 and channel 2 reporting it in the prime time news programs and the biggest newspapers as well as the local and world’s leading chess websites giving it a large coverage.

The championship diary, photo gallery, full standings and pairings, the complete games PGN file as well as informative articles may be found on the official website: www.eicc2015.com 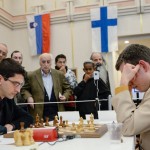 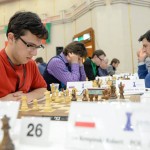 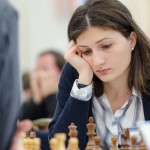 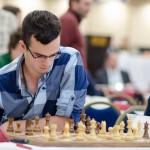 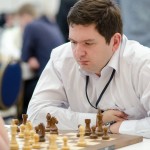 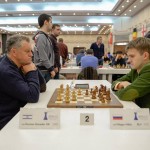