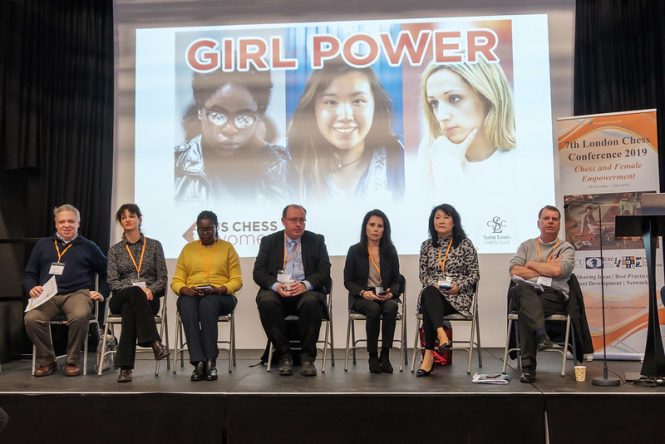 London Chess Conference 2019, with the main theme “Chess and Female Empowerment” took place on 30 November and 1st December 2019. The event is the last 4 years supported by the European Chess Union, and this year additionally through the FIDE Development Fund.

The conference opened with the welcome speech of Mr. Malcolm Pein who was supporting the Conference from the 1st year as a part of the London Chess Classic.

After the welcome speech, Chairman of ECU Education Commission Mr. Jesper Hall presented the main targets of the Conference and the work in progress by the ECU EDU commission.

The conference examined the involvement of women and girls in chess and presented insights into how to improve the gender balance. Primary and secondary school teachers had a chance to learn how to make chess a more engaging activity through its social and collaborative modes.

Containing many workshops, presentations, debates, round tables and demonstrations, the Conference provided ideas and initiatives for those striving to improve the engagement of women in science, technology, engineering and mathematics.

The conference was also dedicated to the recent study developed by ECU EDU Commission and Survey on Women’s Chess in Europe. Analyzing the results of the Survey, Ms Alice O’Gorman, member of the ECU Women’s Commission presented the state about the Women’s Chess throughout European countries and Chess Federations.

A study conducted through the US Chess Federation provided qualitative insights into chess and gender issues, while an analysis of online play in the Netherlands provided details of how boys and girls compare. The US Chess Federation has shared a short video by Jenny Schweitzer, a New York-based director. In this inspiring film, young female chess players explain the emotional and intellectual impact of chess in their lives and the challenges they’ve faced in the game.

The Legend Grandmaster Judit Polgar, after she has been awarded in Monaco on the Golden Pawn Ceremony, flew to London to share her valuable experiences on Women’s chess during the 7th London Chess Conference.

Among more than 40 speakers from around 30 countries of the Conference were also: the Chairman of the FIDE Chess in Education Commission Mr. Smbat Lputian and the Secretary Mr. Kevin O’Connell who took part in sessions and debates.

Immediately by the end of the London Chess Conference, professional teacher training courses certificated by the European Chess Union started in London. The courses cover Teaching Chess in Primary School (ECU101) and Learning Mathematics through Chess (ECU102) and will take place from 2nd-6th December.