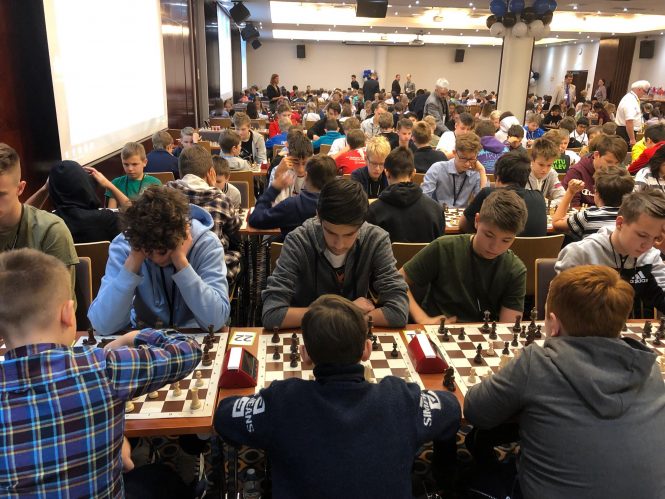 The event launched with Competition in Solving problems, and the next on the schedule was European Youth Rapid Chess Championship 2019, which was played on 1st and 2nd of December.

More than 650 boys and girls coming from 28 European federation competed in 6 age categories of Rapid Championship: U8, U10, U12, U14, U16 and U18, Open and Girls sections separately.

In U10 open section, Vetokhin Savva (RUS, 1993) and Dubnevych Maksym (UKR, 1714) tied for the top, each scoring 8 points. Thanks to better tiebreaks criteria Vetokhin Savva took gold and Dubnevych Maksym was silver. Morkunas Gustas (LTU, 1735) finished on the third place thanks to better tiebreaks than Toktomushev Teimur (UKR, 1932), since both had score of 7 points.

Hungarian International master Kozak Adam (HUN, 2240) took convincing victory in Open U18 section scoring 7.5 points, and was a full point ahead of his compatriot Papp Levente (HUN, 2302) and Zarubitski Viachaslau (BLR, 2273) who followed him with 6.5 points, each. According to tiebreaks, Papp Levente was second and Zarubitski Viachaslau came third.

Immediately by the end of Individual Rapid Competition, European Youth Rapid Team Chess Championship 2019 was played on 2nd of December.

Russian “Champions” team took a victory in U10 section thanks to better tiebreaks thank Ukrainian “Chess Stars”, since each scored 12 match points. Additional criteria also decided the bronze medal, since Swordfish from Russia and team Lithuania 1 were in a tie with 11 points, each. Swordfish came third, and Lithuania 1 was fourth.

Team of Belarus 1 scored perfect 14 match points and took a convincing victory in U14 section. St. Petersburg Chess Club from Russia won silver with 11 match points, while Belarus 2 and Yamal from Russia tied for the bronze, each with 10 match points. According to tiebreaks, Belarus 2 took bronze medals and Yamal ended on the 4th place.

In U18 section, Russian team took all the victories and became a sole Winner of the event with 14 match points. Belarus and Lithuania tied for the second place with 10 match points, each, but eventually Belarus came second and Lithuania went third.

European Youth Blitz Chess Championship 2019 took place today in the morning, with participation of more than 600 players. The event was played in 3 age categories: U10, U14 and U18, open and girls separately.