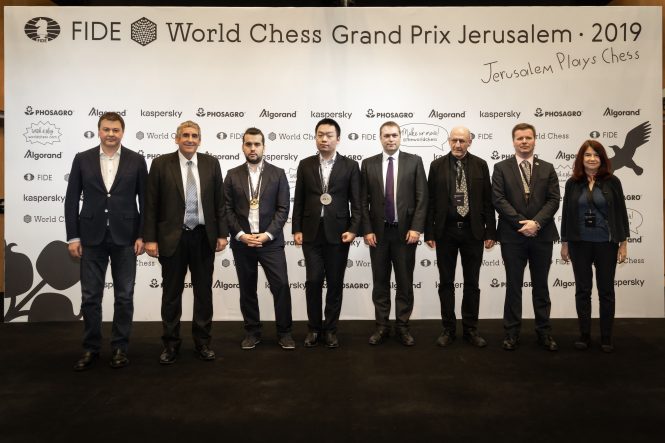 Ian Nepomniachtchi (RUS, 2767) defeated Wei Yi (CHN, 2725) in the finals of the Jerusalem Grand Prix 2019 and became one of the qualifiers for the next FIDE Candidates Tournament.

Nepomniachtchi with black pieces won the first game of the final match after a beautiful technical realisation in an endgame. The second game started sharply, with sacrifices of two pieces by Wei Yi, who attacked the White’s King side, but the game finished with a perpetual check which brought 10 Grand Prix points to Ian Nepomniachtchi and a qualifier spot for the next Candidates Tournament.

The first place on the overall Grand Prix Standings went to Grischuk Alexander (RUS, 2777) with score of 20 Grand Prix points, and Nepomniachtchi took the second place with 19 points.

FIDE confirmed yesterday the final list for the Candidates Tournament 2020 which will take place in Yekaterinburg from March 15 – April 5, 2020. The list is:

The wildcard participant Kirill Alekseenko was confirmed by the President of the Russian Chess Federation Mr. Andrey Filatov.

“I want to sincerely congratulate two Russian Grandmasters who, in an extremely stubborn struggle, won spots in the Candidates tournament.
I also want to mention the young Petersburg grandmaster Kirill Alekseenko, who won the wild card. According to the FIDE rules, he was the only Russian chess player who could be nominated for participation in the Candidates tournament 2020.