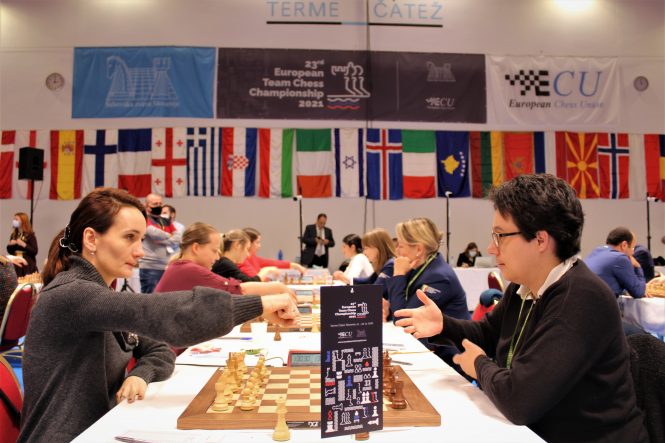 After five played rounds at the European Team Chess Championship 2021 in Terme Catez, Slovenia, six teams of the Open section and the Russian Women’s team go to the resting day heading the crosstables.

The top two matches of the European Team Chess Championship 2021 ended in a draw 2-2 result. All four games of the Azerbaijan – Russia match ended in a peaceful manner, while two decisive results happened in the match between Spain and Hungary.

Armenia took a narrow victory against France, the Netherlands was victorious against Serbia with the same 2.5-1.5 score and Ukraine won the match against Georgia to be in a joined lead with 5 mentioned teams: Russia, Azerbaijan, Hungary, Armenia, and Netherlands.

Today is the resting day, and the fights for the European throne continue with the sixth round, on Thursday, 18th of November, starting from 15:00 CEST.

All the results, standings and pairings can be found here.

Russian Women’s team emerged as the sole winner of the Women’s Championship after overcoming the Italian team. Shuvalova Polina was a hero for Russians, defeating Sedina Elena to bring a thin 2.5-1.5 victory for Russia.

With a score of 2.5-1.5, Georgia won the match against Armenia, scoring 8 match points. Greece has beaten the team of France to tie for second place with the Georgian team, having the same number of match points.

All the results, pairings, and rank tables can be found here.

Despite the top boards, all the eyes were on the Open section match between Scotland and Ireland, where 11 years old Frederik Gordon outplayed 16 years old Kanyamarala Trisha.

All the games of the event are broadcasted live together with commentaries by GM Alojzije Jankovic. ECU President Mr. Zurab Azmaiparashvili yesterday joined the LIVE studio and commented on the games.