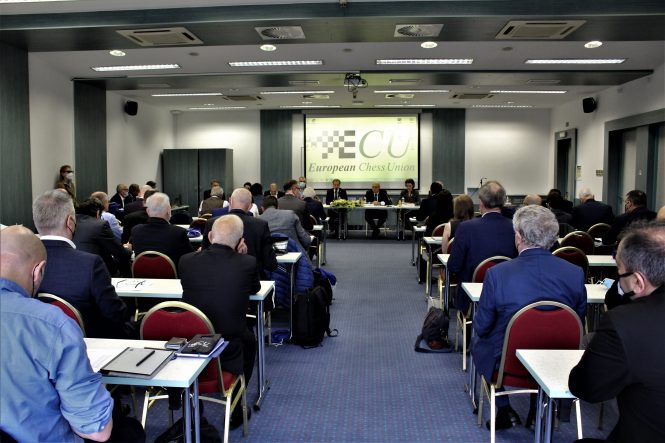 The ECU Board meeting and the General Assembly took place on 12 and 13 November respectively at the Terme Hotel in Terme Čatež, Slovenia, during the 2021 European Team Chess Championship with the generous hospitality of the Slovenian Chess Federation.

The President of the Slovenian Chess Federation, Milan Brglez, welcomed all delegates and informed about the special conditions and security measures that apply to the events. He confirmed that Slovenia will host the European Individual Championship in 2022.

The President of FIDE, Mr. Arkady Dvorkovich, attended the Board meeting and the General Assembly and thanked the ECU President, Board and all European federations for the good cooperation during the difficult years of the pandemic. Mr. Dvorkovich stressed that the mutual trust built between FIDE and ECU will lead to many more successful chess events and chess projects in the future.