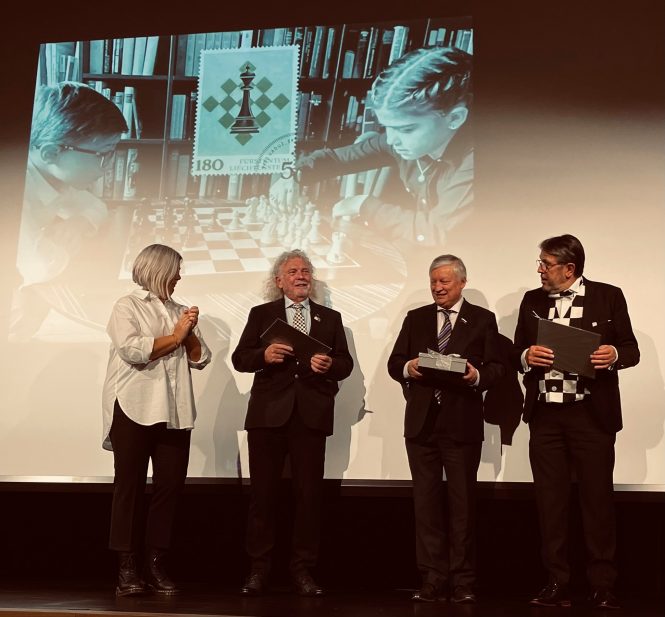 The Liechtestein Chess Federation celebrated its 50th anniversary since its founding on Sunday, November 14. An impressive gala dinner with many presentations and performances and a simultaneous exhibition with world chess champion Anatoly Karpov were the main components of the festive program

In addition to many guests and dignitaries, the celebrations were attended by the Minister of Foreign Affairs, Sports and Education of Liechtenstein, Ms. Foreword Dominique Hasler, the President of the Liechtenstein Olympic Committee, Mr. Stefan Marxer, the Executive Director of FIDE and ECU Vice President, Mrs. Dana-Rezience Ozola, and the ECU Secretary General, Mr. Theodoros Tsorbatzoglou.

The Liechtenstein Post Office, known for its special stamp issues, has issued a special chess edition for the occasion.

The Liechtenstein Chess Federation was founded on July 5, 1971, and became a full member of the European Chess Union in 1986. Until then, we have witnessed the active participation of the Federation in Chess Olympiads, World and European Championships.

It was our pleasure to contribute to the Liechtenstein Chess in Schools program, which was launched in 2015 on the initiative of a good friend and chess lover, Renato Frick.

We are sure that Chess in Liechtenstein will see a big boost in the coming years, as the federation is now focusing on the development of youth and women’s chess.

It gives me great satisfaction to be part of this year’s celebrations and we will always be a reliable partner for the common chess goals.