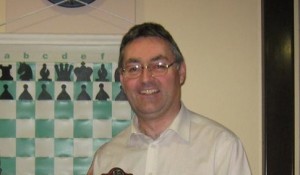 At the Glorney, Gilbert junior international competitions in Scotland in early August, I announced my intention to seek election to the role of Chairperson of the Union.

Since then, I have received a huge level of support, encouragement and good wishes from right across the Irish Chess community. The overwhelming vote of support that I received at the AGM last Sunday, combined with the encouragement and good wishes expressed to me both before and since the AGM, has given me a clear mandate to work collaboratively with the Incoming Executive Committee of the ICU and the chess community in Ireland to support and develop the game that we enjoy so much. I would like to thank everybody who has contacted me to convey their support and good wishes and the large numbers of members who attended the AGM to vote for me.

We have some very exciting projects to work on over the coming months, including the hosting of the Glorney Gilbert Cup Competition in 2015. I also intend to build on existing structures for coaching and development of the game generally. Given the volume and nature of the business that was considered during the 2014 AGM, which stretched to almost 6 hours in duration, there are a number of “legacy issues” that the incoming Executive Committee will also address in the coming months. These include proposals for constitutional reforms and consideration of the overall structure of the Executive Committee and how we can work better as a team dedicated to the service of Irish chess into the future.
It is also my intention that information about the issues under consideration by the ICU Executive will be published on our website from now on and I would welcome any comments on, or opinions about, the business of the ICU that members wish to make on an ongoing basis.
The incoming Executive Committee and I are looking forward to the challenges ahead with great optimism and to keeping in touch with all our members.