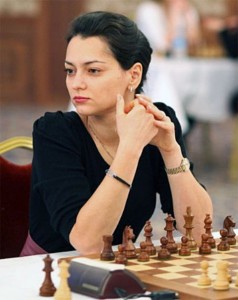 Kosteniuk took the gold despite the loss in the final round, thanks to the previous row of six consecutive victories.

GM Valentina Gunina (RUS) was the only one to overtake Kosteniuk, but she was defeated by the newly crowned European Champion GM Natalia Zhukova in the final round.

The 2015 European-ACP Women’s Rapid Championship was held 1-3 June, 2015 at the Kutaisi City Hall in Kutaisi, Georgia.

The event was organized by the European Chess Union, Georgian Chess Federation and ACP. The playing format was 11-round Swiss tournament with the rate of play 15 min + 10 seconds increment per move.

48 players from ten countries competed, including 6 GMs, 5 WGMs and 14 IMs.