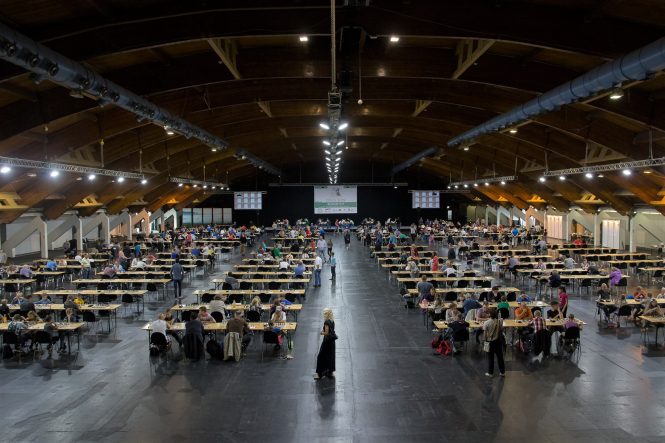 In these uncertain times we are pleased to announce some good news – the 10th edition of Riga Technical University Open has just been confirmed for 7th till 15th August!

That means one of the biggest chess Festivals in Europe is back after a one year hiatus (caused, of course, by the coronavirus pandemic).

As we know the “absence makes the heart grow fonder” and it seems the organisers really missed the chess-buzz in Riga. This summer they will warmly welcome back all the chess-lovers with 9 different tournaments (something for everyone!) and the record 28 000 euros prize fund!

Despite coronavirus restrictions, it is expected to be as impressive as ever, especially that according to the current guidelines international sporting events in Latvia can happen with an unlimited number of participants.

Winner of the 9th edition was GM Igor Kovalenko, vice-champion of the 2016 European Championship, and the best lady was IM/WGM Irina Bulmaga, winner of the bronze medal in the 2014 Chess Olympiad.

This year there are already over 200 participants signed up, with over 100 from 25 different countries in Open A alone. Interestingly, that includes 20 grandmasters and 62 titled players. It should be a great treat for spectators and also an amazing destination for players who want to fight for norms and get new titles.

To make the 10th edition of RTU Open more special thanks to FIDE financial support we have improved several things. Stronger anti cheating measures will be taken to make sure that every participant will be playing only against his/her opponent. Another important improvement is that women and senior players will have significantly increased special prizes.

Riga Technical University Open is a perfect event for ambitious players, but also for chess-lovers with a… somewhat more relaxed approach or busier schedule. There are 3 Opens that only take 4 or even 3 days, so even the busiest of us can participate.

Below you can find details regarding each open:

ELO Tournament with GM, IM, WGM and WIM norms. 9 rounds, 90 minutes per game per player + 30 seconds per move starting from the move 1. The tournament will be part of ACP Tour

starting from the move 1.

The cherry on top is the fact that the Festival is organised in Riga, often called Paris of the North. A beautiful, classy and modern city, and quite a unique european capital. It has an amazing Old Town (UNESCO World Heritage Site), yet is still very green and close to the seaside. Even from the playing hall, which is just across the river from the city centre, the famous Jurmala beaches are only 20min drive away.

Feel free to contact the organizers via email chess@rtu.lv.

*Considering a difficult world-wide situation, there are some restrictions in Latvia.

Kids under the age of 10 can not participate in the event. All participants and guests have to be accredited.

For more information about the restrictions please check the government page or contact the organisers.