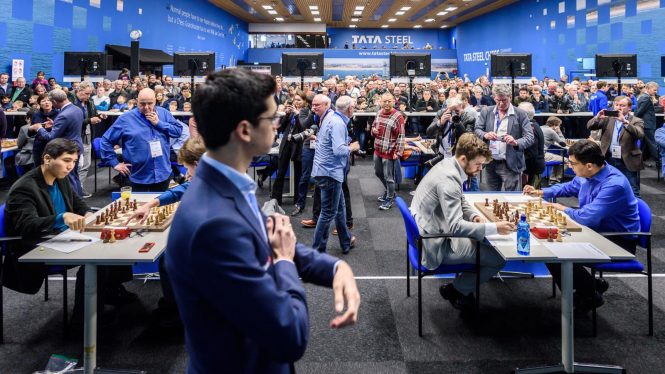 Eight rounds of Tata Steel Masters have been already played in Wijk aan Zee, Netherlands, and Caruana Fabiano(USA, 2822) and 16 years old Firouzja Alireza (2723) tie for the top, scoring 5.5 points each.

In the 8th round, Caruana took a victory over a former World Chess Champion, Anand Viswanathan (IND, 2758), while Firouzja Alireza drew with black pieces with Van Foreest Jorden (NED, 2644), and both went on the resting day as leaders.

So Wesley (USA, 2765) and Van Foreest Jorden (NED, 2644) follow up with 5 points, each. In round 8, reigning World Chess Champion Magnus Carlsen, accomplished the first victory against Vitiugov, Nikita and in the round 9 faces Firouzja Alireza!

Round 9 starts tomorrow and brings the following pairings:

The round 8 was opened by Samunenkov Ihor from Ukraine- the Winner of the event “Future Champions of Europe” organised by Judit Polgar Chess Foundation and European Chess Union.

Live transmission of the games is available through the Official Website of the event.

Photos from Official Website of the event (by official photographer of Tata Steel – Alina l’Ami.