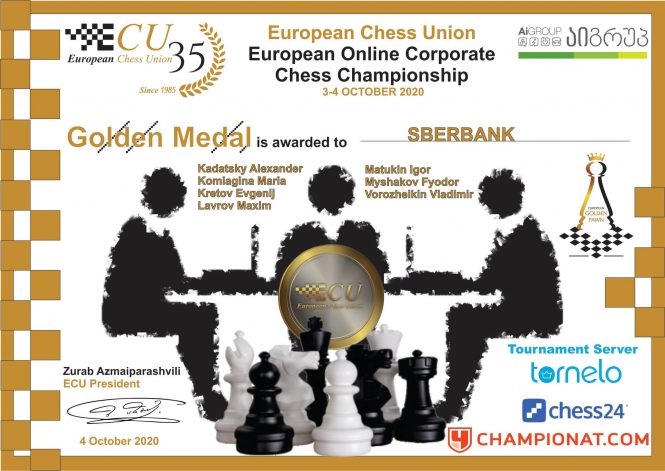 The Winner of the event became team of Sberbank from Russia, after winning both blitz and rapid events. Silver medal went to Khareba from Georgia which took two second places during each day.

Two teams tied for the third place with the same score: UE “Information and Computing Center Ministry of Finance of the Rep. of Belarus” and PROBIT Sp. z o.o. from Poland so the third place and prize are divided equally between these two teams.

The Team Medalists will be awarded with ECU Medals and special invitations for European Golden Pawn Ceremony in Monaco.

The Chess for Life Grand Award is presented to Kaspersky (Russia)- the company entering the most participants. The award recognises the achievement of a very special Organisation whose management and staff have responded to the challenge of team spirit and morale in the workplace.

The best player of the event and the Winner on the individual standings became Myshakov Fyodor (Team Sberbank) scoring 6/7 in the rapid event and 7.5/9 in the blitz event!

Second on the indivudal ranking list is Georgian Grandmaster Jojua Davit (Team Khareba) who scored 6 points in rapid and 7 points in blitz eventt.

All the games were broadcasted LIVE with commentaries by WGM Keti Tsatsalashvili through the ECU twitch channel.