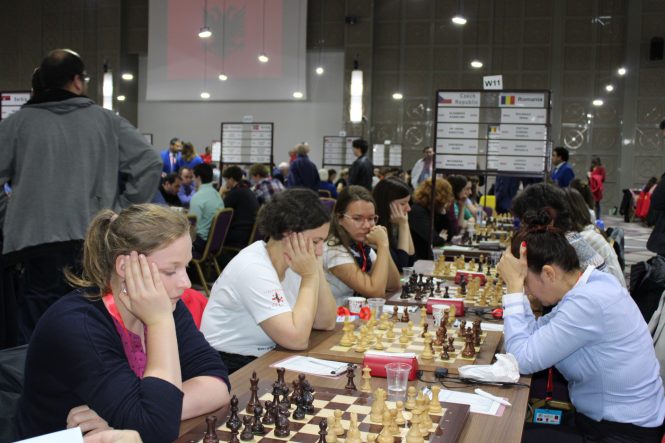 After seven played rounds at European Team Chess Championship 2019 in Batumi, Georgia, teams of Russia lead in both sections of the event!

Team of Russia in Open section maintained the leadership with draw against Germany. Nisipeanu liviu Dieter (GER, 2656) brought a point to Germany after defeating Vitiugov Nikita (RUS, 2732) on the first board with white pieces. Games on the 2nd and the 3rd board ended in a peaceful manner-draw, while on the 4th board Daniil Dubov (RUS, 2699) made a tactical masterpiece with Whites against Svane Rasmus (GER, 2592) and mate a black’s king on the a3 square!

The result of 2-2 was enough for Russian team to maintain the sole leadership of the event. They are followed by teams of England, Ukraine and Germany, scoring 11 points, each.

In the 8th round, which starts tomorrow at 15:00 (local time), Russia meets England on the 1st board, and Ukraine plays against Germany.

Russian Women team leads in Women section after convincing win over Poland with result of 4-0. With score of 13 match points, Russia is two match points ahead of the runner-up -Georgia.

Azerbaijan, Ukraine and Armenia tie for the third place, each with 10 match points.

Only two rounds left to be played before the announcement of the Winner of European Team Chess Championship 2019. All the games are live transmitted and live broadcast, together with live commentary may be followed online through the official website of the event.