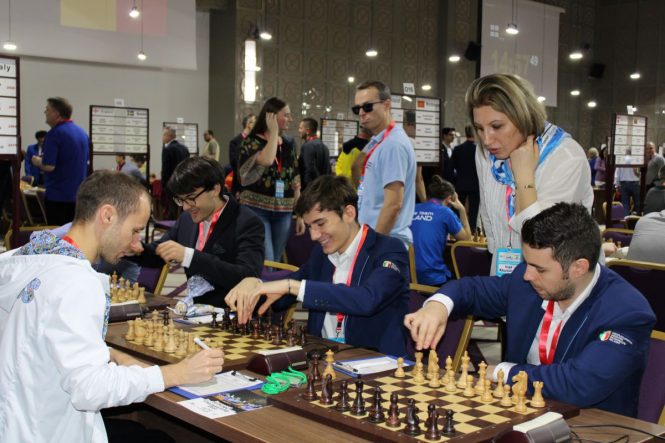 Three rounds have been already played at European Team Chess Championship 2019 in Batumi, Georgia, and both sections (Open and Women) got 3 teams as emerged leaders.

In Open section, top seeds suffered huge upsets in the first three rounds. Teams of Armenia, Ukraine and Netherlands are the only ones who scored perfect 6 match points, and share the top after 3 played rounds.

The leading trio is followed by only 3 teams- England, Russia and Turkey, scoring 5 match points, each.

In the round 4, which starts today at 15:00 (local time), Armenia meets Ukraine on the 1st board, and Netherlands plays against England.

Teams of Georgia, Russia and Italy emerged on the top of Women section, each with maximum score of 6 match points and Armenia and Hungary run-up with 5 match points, each.

In the 4th round we will watch the two top seeds in the clash of the leaders: Georgia against Russia, while Italy meets with Hungary.

The 4th round of the event starts today at 15:00 (local time), and the LIVE transmission of the games, together with live commentaries is available through the Official Website of the event.

Before the start of the first round, ECU President, Mr. Zurab Azmaiparashvili, opened the event by playing the first ceremonial move on the first board of Open section, in the match played between Russia and Denmark.