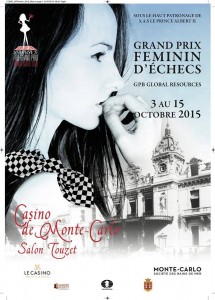 The first leg of FIDE Women’s Grand Prix will be held from 2nd to 16th October 2015, in Monte Carlo, Monaco.

FIDE announced the Women’s Grand Prix 2015-2016 which will give qualification to the Women’s World Championship match in 2017.

Another European city will be the host of the third leg of Women’s Grand Prix – Tbilisi/Georgia, in May 2016.

Second leg will take place in Kish/Iran in February 2016, while the last stage will be held in Chengdu/China in July 2016.

The 10 original qualifiers who have to confirm their participation by 20 August 2015 are:

The first reserve for any replacement needed is Alexandra Kosteniuk (by rating).