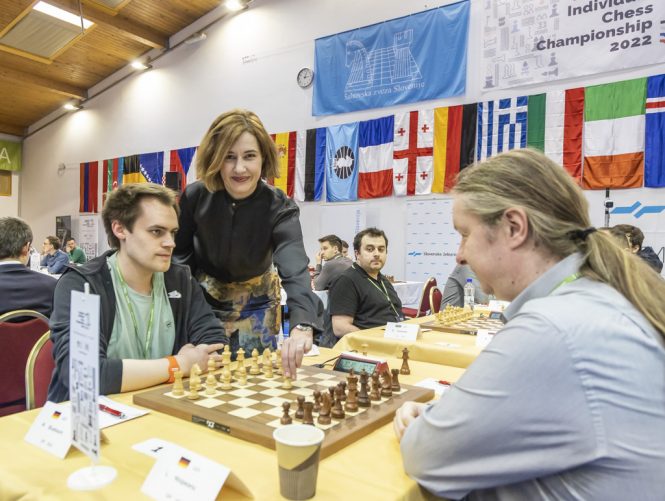 After 9 played rounds at the European Individual Chess Championship 2022 in Terme Catez, Slovenia, GM Matthias Bluebaum (GER, 2642) is the sole leader of the event scoring 7.5 points.

After a quick draw in the round 9 against his compatriot GM Nisipeanu Liviu-Dieter (GER, 2652), Bluebaum kept the leadership just two rounds before the end of the Championship.

The 9th round of the event was opened by ECU Vice President and FIDE CEO Ms. Dana Reizniece-Ozola who made the first honorary move on the first board. Shortly before the start of the round, she addressed the players and wished them luck, as well as the ECU President Mr. Zurab Azmaiparashvili.

Only two rounds left to be played before the announcement of the Winners and 20 qualifiers for the FIDE World Cup. The penultimate 10th round starts today at 15:00 CET and can be followed live through the Official website of the event, together with commentaries by GM Alojzije Jankovic.

Live stream with commentaries can be followed also through the event’s YouTube channel.