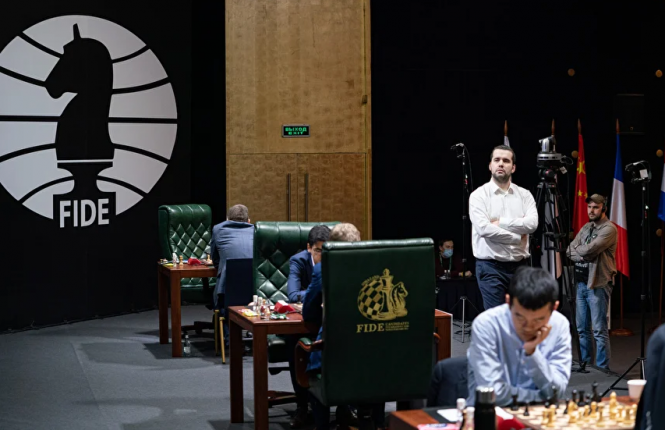 After 6 played rounds and before the resting day, Ian Nepomniachtchi (RUS, 2774) emerged as the sole leader of FIDE Candidates Tournament 2020.

Nepomniachtchi defeated Ding Liren (CHN, 2805) with white pieces, transferring the positional advantage in Ruy Lopez for a material pawn up position. The passed pawn shortly after forced Ding Liren to give up a piece, and in the 40th move, he resigned.

Another decisive result happened in a game played between Alekseenko Kirill (RUS, 2698) against Giri Anish (NED, 2763). Young Russian made a critical mistake in the 87th move in a drawn nights endgame and only 10 moves later, resigned. With this victory, Anish Giri for a first time ever experienced victory on a Candidates Tournament.

Grischuk Alexander (RUS, 2777) sacrificed a pawn in a Ruy Lopez for initiative, in a game played against Fabiano Caruana (USA, 2842). After entering an equal endgame, the draw was claimed in the move 54.

Maxime Vachier Lagrave (FRA, 2767) hold a draw against Wang Hao (CHN, 2762) in an endgame with a pawn down. This way, Vachier Lagrave maintained the runner-up position, scoring 3.5 points.

Today is the resting day in Yekaterinburg. The round 7 starts tomorrow and the pairings are:

All the games can be followed live trough the Official Website of the event.