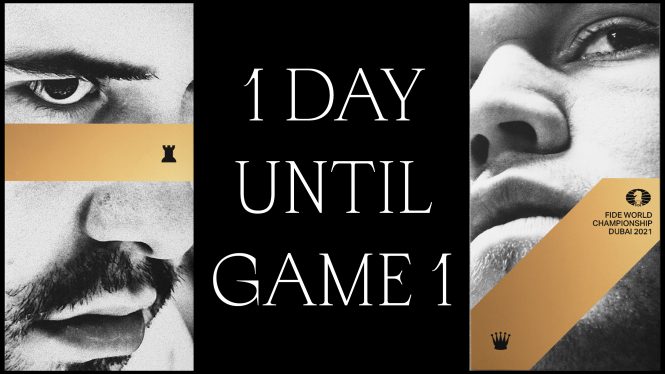 The player who scores 7.5 points will become the Winner of the World Championship Match. If the score after 14 games is equal, the tie-break match will decide the new World Chess Champion.

The Opening press conference of the event took place yesterday morning, with the participation of players Magnus Carlsen and Ian Nepomniachtchi, FIDE President Arkady Dvorkovich, and representatives for event partners Kaspersky and PhosAgro.

The press conference concluded with a representation of an impressive trophy that will be passed in the hands of the Match Winner. The trophy is made by sterling silver, gold plating, dolerite and obsidian, created by the Chamovskikh Jewelry House, with the support of the Sverdlovsk Region Chess Federation represented by its president Andrey Simanovsky, owner of SIMA-LAND company. The design of the cup was provided by FIDE President Arkady Dvorkovich.

The Opening gala ceremony of the event was held yesterday evening, with the attendance of distinguished guests representing sponsors and chess federations.

The drawing of lots took place during the opening ceremony deciding that Ian Nepomniachtchi takes White pieces in the first game of the match.

Although the Chess World odds are in favor of the reigning World Chess Champion Magnus Carlsen, the challenger Ian Nepomniachtchi is the only top player in the world who has a positive score against Carlsen. In classical time control, Nepomniachthi won 4 games, made 8 draws, and lost only one game to Magnus.

More detailed information about the Match and links for the live broadcast of the games can be found on the Official website of the event.

Photo gallery of the event