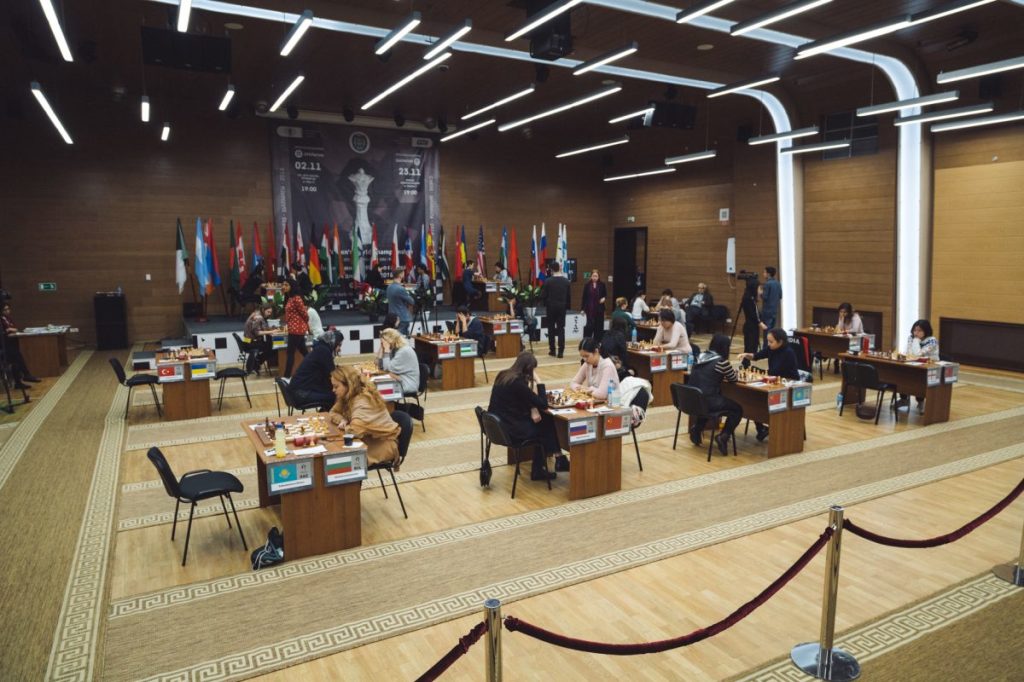 The fourth round of the Championship was very intense. The first one who reserved the seat for semifinals was Lagno Kateryna (RUS, 2556) who convincingly won both games of the match played against Lei Tingjie (CHN, 2457). Lagno reached the step before the finals after very hard matches. In the first round, Kateryna Lagno overplayed South African player February Jesse Niki, and then met Hungarian GM Hoang Thang Trang (HUN, 2448) in the 2nd round. 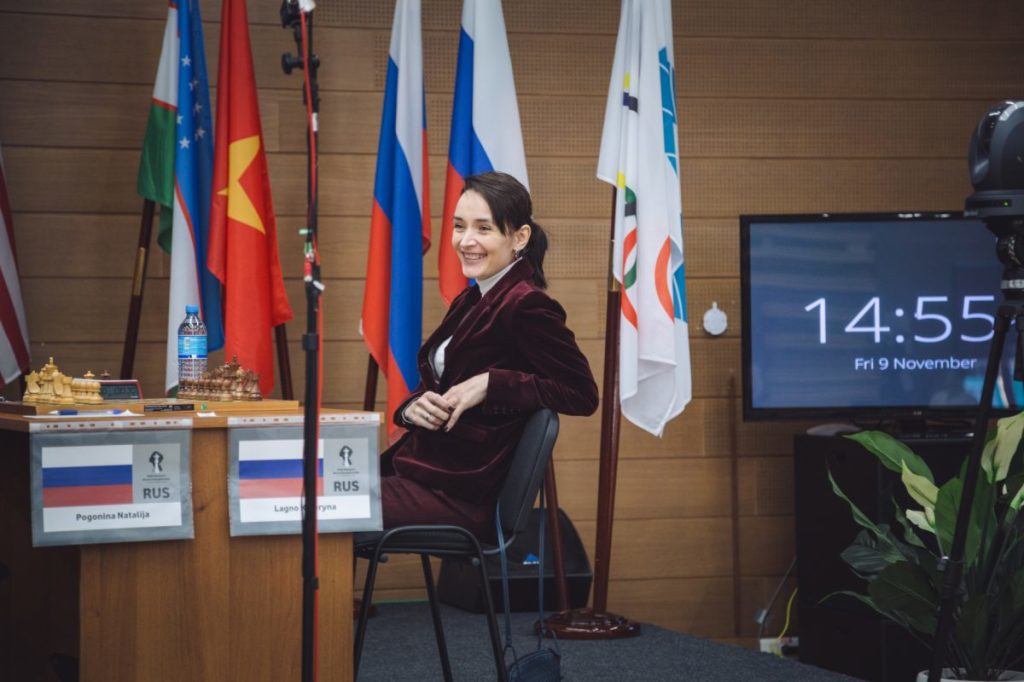 After two draws of the regular part of the match, Lagno won both games of the tiebreaks and proceeded forward on the path for the title. In the 3rd round of the Championship, Kateryna Lagno played against Natalia Pogonina (RUS, 2465), domestic Ugra’s player. Russian girls showed the fighting spirit and after 6 consecutive draws, and two victories for whites, entered the Armageddon game which determined Lagno as a participant of the 4th round. After such a match, Kateryna Lagno didn’t seemed tired, overwhelmed Lei Tingjie and waited to see who will be her pair in the semifinal match of the FIDE Women’s World Chess Championship 2018. 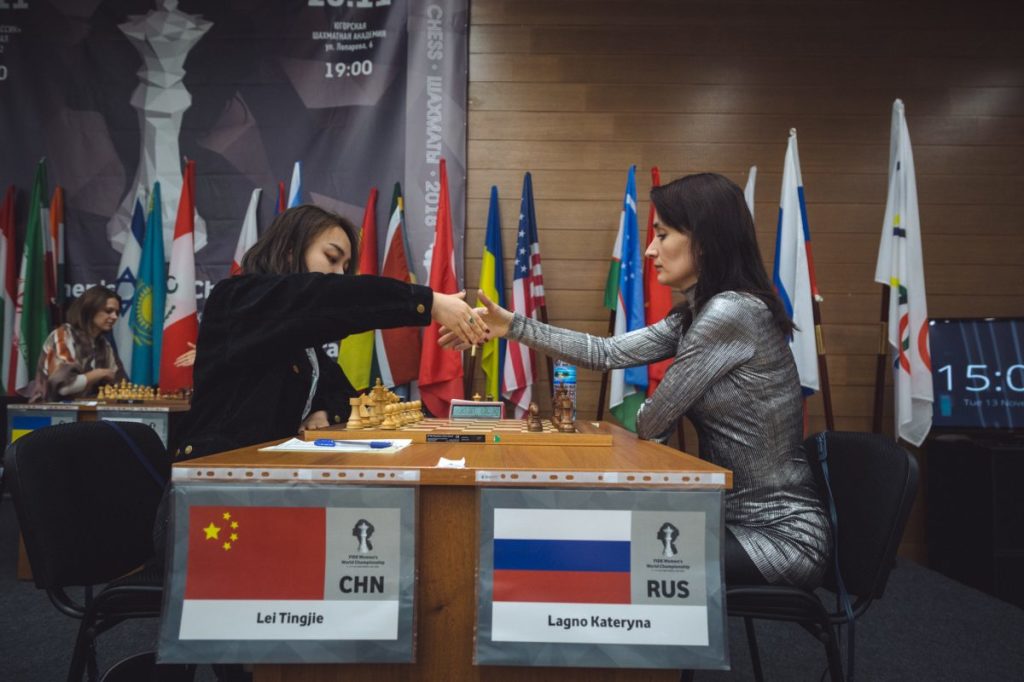 The other player who entered the 5th round of the Championship was the reigning World Champion Ju Wenjun (CHN, 2568) who won the second game of the match played against Tokhirjonova Gulrukhbegim (UZB, 2435) after the draw in the first game. Early in the second game of the match, Chinese reached almost winning position, but after a blunder, almost equalized. At the end, Tokhirjonova didn’t resist, and Ju Wenjun defending her title became the second semifinalist of the Championship 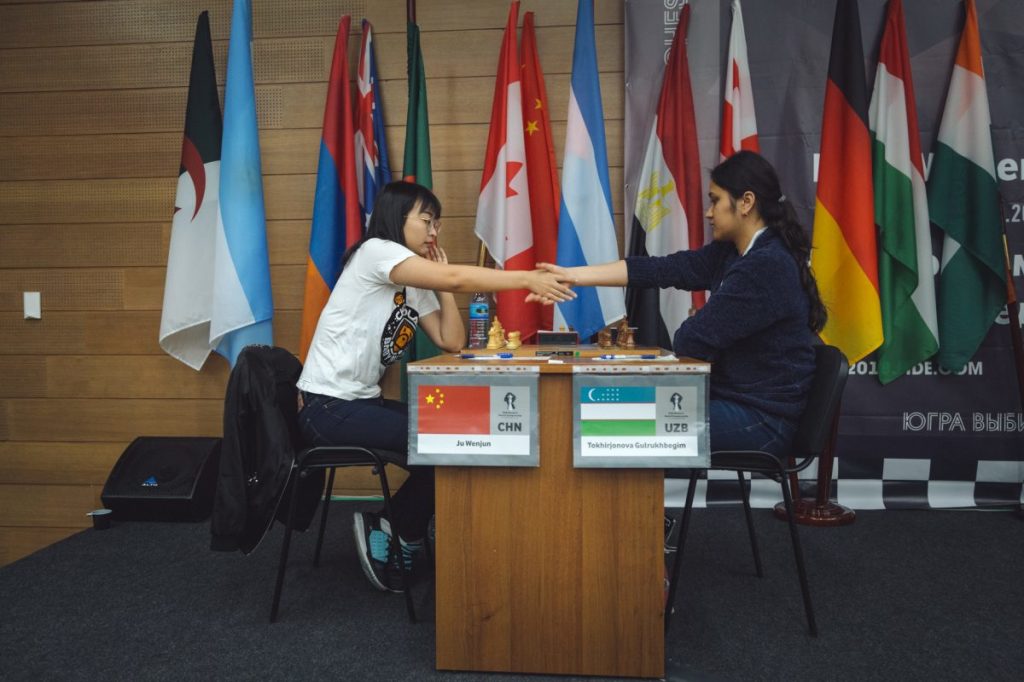 Ju Wenjun came to the best four of the event after winning Hardegen Kathryn (AUT, 1832) in the first round with 2 victories. In the second round, Wenjun defeated Krush, Irina (USA, 2434) with score 1.5-0.5 and proceeded to the third round where she met Zhai Mo (CHN, 2352). Even though, Ju Wenjun was a favorite, Zhai Mo tried to make another upset after surprises she made in the first rounds, when she kicked out Girya Olga (RUS, 2481) and Batsiashvili Nino (GEO, 2465). Anyway, Ju Wenjun was convincing in the first game when she took the leadership and the second game ended in a peaceful manner, which was enough to get the 4th round where Ju Wenjun defeated Tokhirjonova Gulrukhbegim (UZB, 2435) to reserve the place in the 5th round of the Championship. 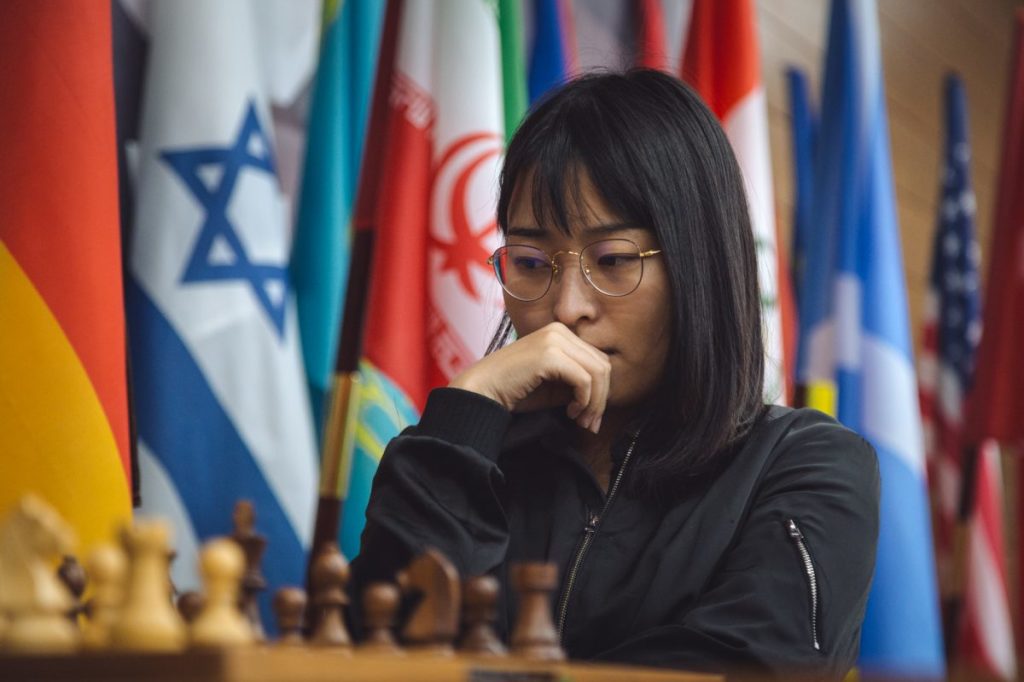 Alexandra Kostenuik (RUS, 2543) was the next one to take a seat of the semifinals after making a victory in a tiebreaks against Muzychuk Anna (UKR, 2564). After first two games ended in a draw, Kosteniuk won the first game of the tiebreaks and resisted in the second game with black pieces.

Kosteniuk passed through Vazquez Maccarini Danitza (PUR, 2065) with 2-0 victory in the 1st round, and then met in the second round with Ni, Shiqun (CHN, 2436). After two draws, they proceeded to a tiebreak match, where Kostenuik was more than satisfied with two victories.  In the third round, Russian played very intense match against Harika, Dronavalli (IND, 2498) which ended in favor of Kosteniuk after two tiebreaks matches and overall result 3.5-2.5. After two consecutive tiebreaks, Alexandra Kostenuik played them also in the 4th round, where she made a victory against Anna Muzychuk.

The last match which determined the last semifinalist of FIDE Women’s World Chess Championship 2018 was more than intense and almost came to the Armageddon game. Marya Muzychuk (UKR, 2545) and 18 years old Abdumalik, Zhansaya (UZB, 2473) played 8 games with 7 decisive results! The match started with victory of Abdumalik Zhansaya, who defeated World Women’s Champion 2015 with black pieces. Muzychuk answered sharper, and managed to win the second game to enter the tiebreaks.

In the first round of tiebreaks, Muzychuk Mariya started with victory with black pieces, but was very shortly after answered by very combative Abdumalik who won the second game. After the second round of the tiebreaks, Muzychuk managed to take the leadership again, but again couldn’t save the second game played with black pieces. In the last round before the Armageddon, Muzychuk won the first game, almost by the same pattern, but this time, she found pleasant position in the second round and the game ended with a perpetual check and draw.

After two won games in the first round against Wafa, Shahenda (EGY, 2145), Mariya Muzychuk ended in a tiebreaks in the second round played against Atalik, Ekaterina (TUR, 2445). Atalik Ekaterina took the leadership in the first round of the match, but Muzychuk won the second game to proceed in tiebreaks and to win them with result 1.5-0.5. In the third round, she was convincing with one victory and one draw against Alinasab, Mobina (IRI, 2236) and entered the fourth round where she defeated Abdumalik Zhansaya to be the last one of the top four.

The semifinals of the FIDE Women’s World Chess Championship 2018 will start today at 15:00 (local time). The live broadcast of matches: Kosteniuk Alexandra (RUS)– Ju Wenjun(CHN) and Muzychuk Mariya(UKR)– Lagno Kateryna(RUS) can be followed through the official website of the Championship. 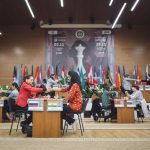 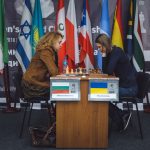 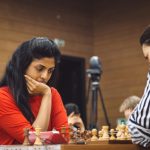 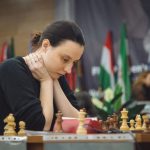 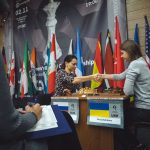