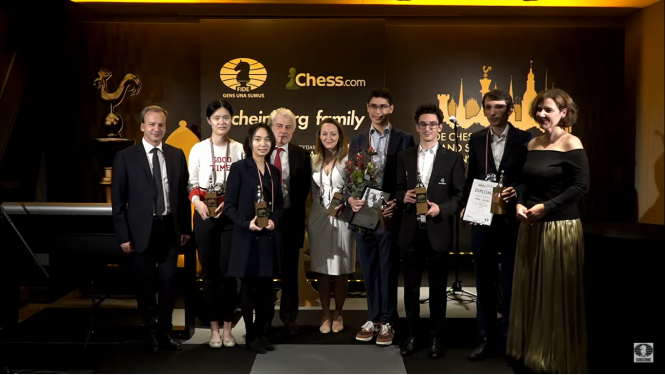 108 players participated in the Open tournament, and after 11 played rounds Firouzja Alireza (FRA, 2770) became the sole Winner of the event with score of 8 points. As a Winner of the event, Firouzja won 70.000$ prize and qualified for the FIDE Candidates Tournament 2022.

Fabiano Caruana (USA, 2800) and Oparin Grigoriy (RUS, 2654) tied for the second place with 7.5 points, each. Tiebreaks criteria decided that Fabiano Caruana takes silver and a ticket for the 2022 Candidates Tournament.

Lei Tingjie (CHN, 2505) clinched the gold medal with a round to spare. With the final score of 9 points, Lei Tingjie won 20.000$ prize and qualified for the Women’s Candidates Tournament 2022.

The Closing Ceremony of the event was attended by FIDE President Arkady Dvorkovich, FIDE CEO and ECU Vice President Dana Reizniece Ozola, and Tournament Director Egons Lavendelis. The Closing ceremony was live broadcasted and could have been followed through the official website of the event.