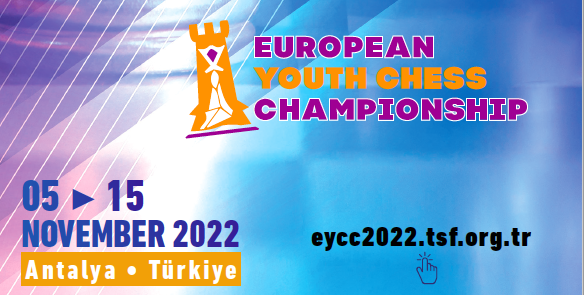 Each national federation, which is a member of the European Chess Union, can register one (1) invited player in each category – under 8, 10, 12, 14, 16 & 18 (boys and girls), with the maximum number of twelve invited players, and the unlimited number of extra players. The registration deadline is 5th September 2022.

In European Youth Championship the board and lodging expenses from the official day of arrival to the breakfast of the day of departure shall be covered by the organising federation for (a) the 12 invited play designated by its federation, (b) the player(s) with a personal right, and (c) the chief of the delegation (captain), who must be a licensed FIDE Trainer.

The events will be played in 9 rounds, swiss system, with time control of 90 minutes for 40 moves plus 30 minutes for the rest of the game with an increment of 30 seconds per move, starting from move one.

The official venue of the event will be *****Pine Beach Hotel Convention Center, which as also the official hotel of the Championship altogether with *****Papillon Ayscha Hotel.