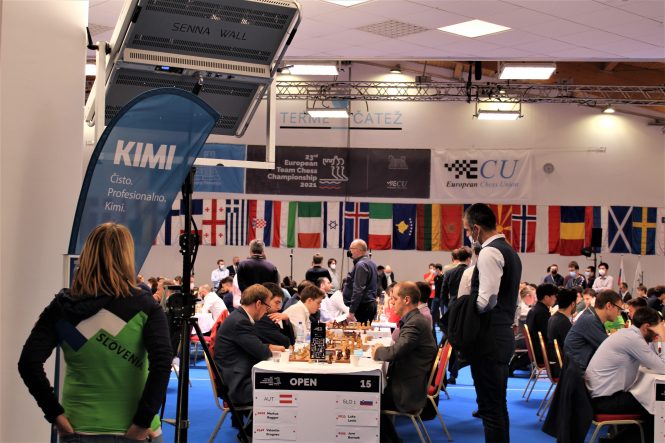 After seven played rounds at the European Team Chess Championship 2021 in Terme Catez, Slovenia, the Russian Women’s team holds the sole lead, while Azerbaijan and Ukraine tie for the top of the Open section.

With a convincing 3-1 victory over Azerbaijan, Russian Women improved their lead scoring the absolute 14 match points. Valentina Gunina was the first one to take a full point for Russia, overwhelming Fataliyeva Ulviyya on the third board. Shuvalova Polina followed with another decisive result, defeating Beydullayeva Govhar on the board 4, while Goryachkina Aleksandra and Kateryna Lagno agreed for draws against Mammadzada Gunay and Balajayeva Khanim (respectively).

All the results, pairings and standings can be found here.

The Russian team of the Open section suffered an upset after a loss against Ukraine. After three draws on boards 1, 2, and 4, 19 years old Shevchenko Kirill brought a narrow 2.5-1.5 victory for Ukrainians beating Alekseenko Kirill. Defeating Russians, the team of Ukraine came on the top of the crosstable with 11 match points.

In another clash of the leaders, Azerbaijan was victorious over Netherlands. With a win of Abasov Nijat over Van Den Doel Erik and three draws on the first three boards, Azeris scored 11 match points to be in a joined lead with Ukrainians.

Russia, Spain, Armenia, Poland, France, and Serbia follow and tie for the third position with 10 match points, each.

All the results, standings, and pairings can be found here.

All the games are broadcasted live and can be followed through the Official webpage of the event together with commentaries by GM Alojzije Jankovic. Jan-Krzysztof Duda today joined the live studio and shared his insights about the upcoming World Championship match.