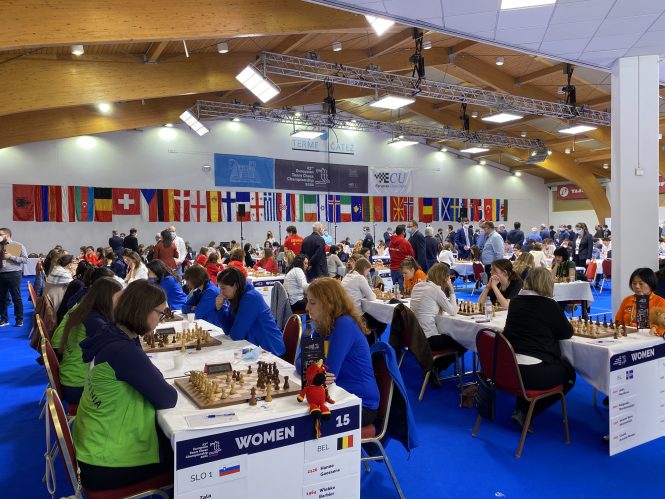 The Opening ceremony started with intonation of the ECU anthem and anthem of Slovenia. The ECU President took an opening speech, and thanked to Slovenian Chess Organization for the organization of the European Team Chess Championship 2021 in difficult conditions during the Covid19 pandemic.

FIDE President, Mr. Arkady Dvorkovich, warmly addresses all the guests, and wished the organizers and to all participants and guests a successful tournament.

Slovenian Parliament Speaker Mr. Igor Zorcic, using the parallels between politics and chess, expressed the satisfaction that Slovenia is the host of the European Team Chess Championship. He welcomed all the participants and wished them a nice and safe stay in Terme Catez, Slovenia.

The first round of the event started today after the short opening ceremony prepared for the players and trainers of the teams. After speeches of ECU President Mr. Zurab Azmaiparashvili and Slovenian Chess Federation President Mr. Milan Brglez, the Chief Arbiter of the event announced the start of the competition.