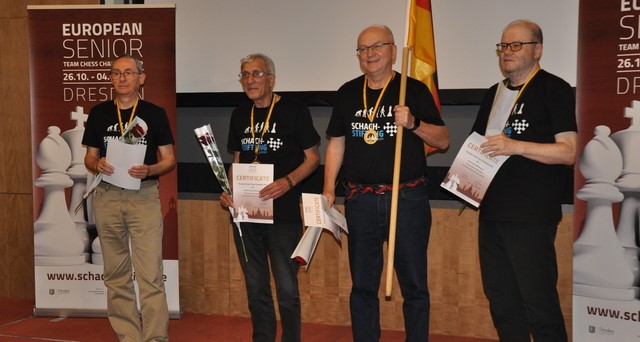 England 50-1 won the 50+ event with a round to spare and after nine played rounds scored convincing 17 match points. Berlin 1 and Germany tied for the second place scoring 14 match points, each. According to tiebreaks criteria (Olympiad-Sonneborn-Berger), Berlin 1 claimed silver and Germany came bronze.

The best ranked women’s team was Germany 1 with score of 8 match points and better tiebreaks than Germany 2 which had the same score. Schachköniginnen Heidenau was third.

The Winners of the event received trophies and medals, and the title of European Senior Team Chess Champions 2022 for the respective category. The total prize fund of the event was 6.000 EUR.

The closing ceremony of the event took place yesterday evening.