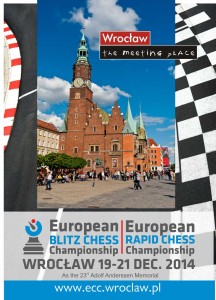 522 players in Rapid and 433 players in Blitz are registered so far, and there are two more days for the registration.

Applications should be sent using the form at the championships website, but no later than on the 20th of November 2014, which is the registration deadline. The application must contain the player’s name, rating, birth date.

The Chief Arbiter of the Championship will be IA Aleksander Sokolski from Poland.

For more information you can contact the tournament Director Mr. Artur Czyz on e-mail: info@ecc.wroclaw.pl or you can visit the official website of the Championship www.ecc.wroclaw.pl