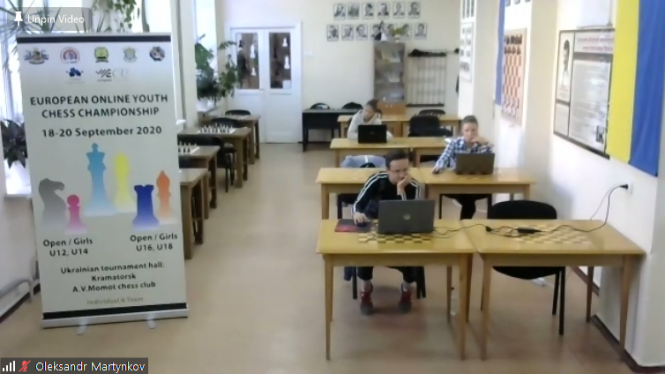 Six rounds have been already played at European Online Youth Chess Championship, which have started on Friday, 18th of September, and concludes today! The closing ceremony of the event will take place on Monday 21st September at 18.00 CEST and will be streamed live.

The event is played through Tornelo platform, from 60 different venues chosen by National federations, with participation of about 750 participants from 40 federations.

Video from the Opening Ceremony:

All the games were live broadcasted from the ECU live studio with WGM Keti Tsatsiashvili and her special guests: GM Adrian Mikhalchishin, ECU Vice President WGM Dana- Reizniece Ozola and ECU President GM Zurab Azmaiparashvili, who shared their thoughts about the event and commented the games of the young chess talents.

After 6 played rounds, each category got emerged leaders.

In Open U18 section, two Grandmaster players: Esipenko Andrey (RUS, 2629) and Schoppen Casper (NED, 2536) tie for the first place, each scoring 5.5 points. They are followed by IM Davtyan Artur (ARM) and
Stefansson Vignir Vatnar (ISR) with 5 points each.

Two Russian players emerged on the top of Open U16 section with the same score, 5.5 points each: IM Makarian Rudik (RUS) and FM Dudin Gleb (RUS).

International master Murzin Volodar from Russia is the sole leader of secion Open U14 scoring 5.5 points, followed by group of five players with score of 5 points each.

Ukrainians Bazakutsa Svyatoslav and Samunenkov Ihor conquered the top of Open U12 section, with score of 5.5 points each.

Three Russian girls Solozhenkina Elizaveta, Nur-Mukhametova Alisa and Zhapova Yana are the only ones to achieve perfect score 6/6 in categories for Girls U18 and Girls U16 and Girls U12, respectively, and emerged as the sole leaders of their respective age sections.

Scoring 5.5 points each, Manko Mariya (UKR) and Ter-Avetisjana Agnesa Stepania (LAT) tie for the top of section Girls U14.

The event connected more than 100 different venues from 40 National federations!

All the results, pairings and standings can be found here.