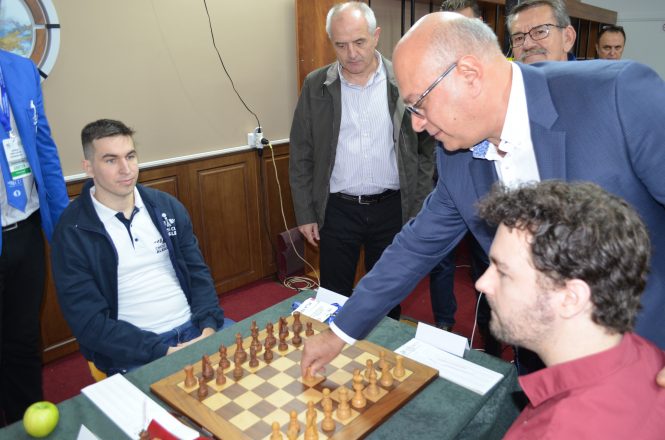 The Opening ceremony of the event took place on 9th November in Official Hotel of the event, with attendance of: President of European Chess Union, Mr. Zurab Azmaiparashvili, President of Montenegro Chess Federation, Mr. Jovan Milovic, Mayor of the city of Ulcinj, Mr. Ljoro Nrekic and Minister of the Foreign Affairs of Montenegro, Mr. Srdja Darmanovic.

After the anthems of Montenegro and ECU, ECU President, Mr. Zurab Azmaiparashvili, addressed the presents and pointed out the progress of Chess Federation of Montenegro which hosts world chess elite.

Minister of Foreign Affairs of Montenegro, and also a chess player, Mr. Srdja Darmanovic, emphasized that Montenegro has hosted many important chess events, and that this event crowns the celebration of 70th anniversary of Montenegro Chess Federation. He also wished a good luck and sports fair atmosphere to all the participants.

The artistic part of the program was performed by Glamor strings, while the moderator of the evening was famous Montenegrin actress Branka Stanic.

The first round of the event started yesterday at 15:00. President of European Chess Union, Mr. Zurab Azmaiparashvili, opened the round and made the first ceremonial move on the first board in the game between: Pruijssers Roeland (team of Echiquier Mosan from Germany)- Andreikin Dmitry (team of Alkaloid from North Macedonia).

No upsets in the first round for the Open section and all the favorites won their matches. Top pairings of the round 2 are:

In the Women section the only surprise was a draw in a match between ZSK Maribor (SLO) and club #3 on the starting list Nona (GEO). Matches on the first two boards ended in a draw, while Khotenashvili Bela (GEO, 2466) brought the point for Nona team after defeating Vidic Teja (SLO, 2189). Mar Karmen (SLO, 2041) made a huge upset by taking a victory against Melia Salome (GEO, 2380) and the match ended with result 2-2.

Top pairings of the round 2 are:

The second round of the event starts today at 15:00 (local time). LIVE broadcast of the games is available through the official website of the event.