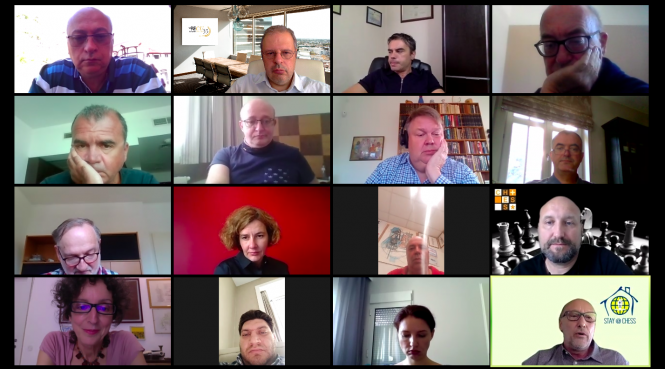 The 4th ECU Board Meeting in 2020 took place on Saturday 12th of September 2020 through teleconference, with full house and special guests including FIDE Deputy President Mr. Bachar Kouatly and Mrs Laura Barnaba representative of  C.S.E.N. the largest Sports Promotion Body in Italy, which partners with ECU for Erasmus+ projects.

The main areas under discussion and decisions were the following:

The official forecast by World Health Organization (WHO) warns that Europe must prepare for a rise in daily COVID-19 cases in October and November. New restrictions imposed by states, borders reclosing and extended quarantine guidelines are announced again.

Under these conditions the free access of all European federations and players, especially to qualification mass events is not guaranteed while organisers express their concern about the instability of their events.

ECU Board decided to postpone all European Competitions for 2020, with the exception of the European Rapid and Blitz Championship 2020 in Katowice, Poland (3-6 December 2020) which last only 3 days and will be organised not as an open event but in an invitational format.

The bidding procedure for the year 2022 is canceled and the  European Calendar for coming years is rescheduled :

The European School (Greece), Senior (Poland), Senior Teams (Poland), Youth Teams (Greece), Corporate (Holland) and Amateur Championship (Croatia) scheduled in 2020 are moved to 2021 and the respective Championships of 2021 to 2022. For the European Youth Rapid & Blitz in Novisad, Serbia will be a later information.

Due to the travel restrictions, ECU Board decided, under special circumstances, to conduct of the 2020 ECU General Assembly through teleconference on Saturday 19 December 2020.  Due to cancelation of the bidding procedure for 2022 the GA will not include in its agenda the selection of venues for 2022.  Proposals for items to be included in the online General Assembly agenda, from European National Chess Federations, can reach ECU Secretariat, secretariat@europechess.org  till Monday 19th of October 2020. The technical details of the meeting will be informed by the publishement of the GA Agenda.

The 1st European Online Women’s Club Cup will be held on 20th-22nd of November 2020 in co-operation with Monte Carlo Chess Club, under the High Patronage of H.S.H Prince Albert of Monaco.

The 1st Intercontinental Youth Team Matches will be organised with Judit Polgar Chess Foundation under the aegis of Global Festival and the support of FIDE Development fund on 10th of October 2020. All participants will have a free master class with legend GM Judit Polgar.

Two online Youth Camps will be organised with top worldwide trainers for the winners of the European Online Youth Chess Championship.

An 8 months training program has been approved under the command of the European Chess Academy. More details will be announced.

A presentation was made for Erasmus program CGS project that has been approved by Erasmus+ program (European Union) with a € 420.000 grant.

ECU will be a partner to the annual London Chess Conference which this year goes online.