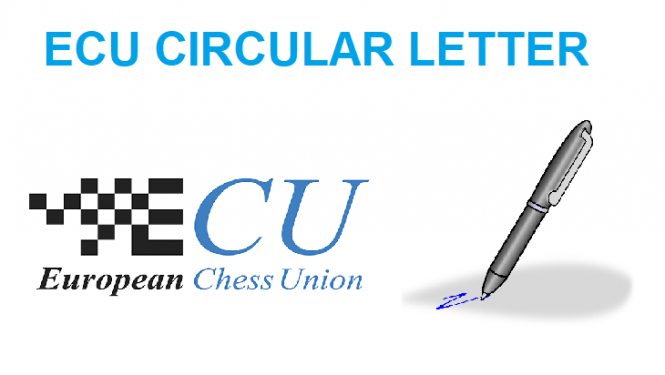 The 2nd ECU Board meeting in 2021 took place on Saturday 20h of February 2021 through teleconference with main item the European Qualification system for the World Championship Cycle.

Concerning the qualification stage for FIDE World Cup 2021, the European Chess Union Board taking in account:

a) The existing health conditions, and travel restrictions in Europe
b) The re-confirmation by FIDE that World Cup 2021 will be organized in Russia starting in the first half of July https://www.fide.com/news/879 and so the continentals qualification stages shall be completed by May 2021.
c) The quality of the European representation
d) The main principle that qualification to FIDE World Cup shall not be restricted by any criteria of nominations or further geographical distribution that will exclude in advance a big number of European players made the following decisions:

The exact regulations for the European Hybrid Qualification event will be finalized and announced by the mid of March but the main organizational terms are the following:

B. The venues will follow the rules of all over the board chess events, including scanning of players in entrance to the playing hall and moving in the area.

C. Federations that will take part will propose the assistant local arbiter(s) and 1 International ECU Qualified on Online events Arbiter per venue that will be the Chief Arbiter in another county’s venue taking in account the distances. Details will be announced but the rule is a foreigner Chief Arbiter on each venue.

D. ECU will appoint the central arbiters panel that will monitor and co-ordinate all event. All the decisions will be made by arbiters. The system of transmission of moves between the venues will foresee a backup solution.

E. Each federation can nominate up to two (2) venues. ECU will examine exceptional cases but, in any case, a request for a venue shall accommodate at least 5 players and the appointment and accommodation of extra arbiters. Players can play in the most convenient county/venue avoiding traveling to its own country.

F. The hybrid event will have a 30,000 euros prize fund supported by the FIDE Continental Development fund.