After six rounds of the World Chess Candidates Tournament Levon Aronian and Sergey Karjakin are in the lead with 4 points.

The game between Levon Aronian (Armenia) and Hikaru Nakamura (USA) began as a theoretical discussion in the Queen’s Indian Defense in which Aronian sacrificed a pawn for an initiative and pressure in the center. Both players followed a known path for a while. Nakamura seemed to navigate the shoals well, but somehow ended up in an endgame in which he was a bit worse. A series of exchanges followed that seemed to put Aronian firmly in the driver’s seat, but he misplayed the rook-and-pawn ending, allowing Nakamura to gain a drawn position. But with both players’ clocks winding down, Nakamura inexplicably grabbed his king when he had to move his rook and wound up in a lost ending once again. This time, Aronian converted to join Karjakin in the lead. 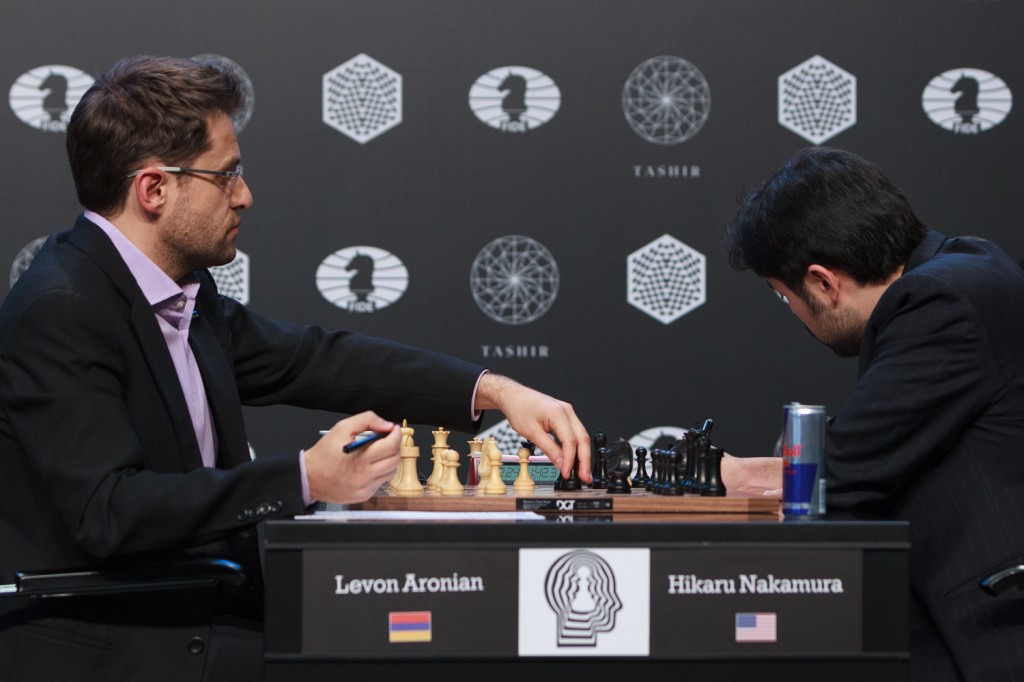 Viswanathan Anand (India) won his second game of the 2016 Candidates with a lightening attack against Peter Svidler (Russia). The opening was a Ruy Lopez and Anand used an anti-Marshall system to avoid the Marshall Attack. Anand seemed to be proceeding slowly, when he suddenly broke in the center with d4. He quickly followed that up with the offer of an exchange sacrifice on e4, which Svidler declined. But then Anand launched a lightening quick King side attack, supported by having the rook on the fourth rank. Svidler was helpless to resist and resigned after only 24 moves. A vintage Anand win. 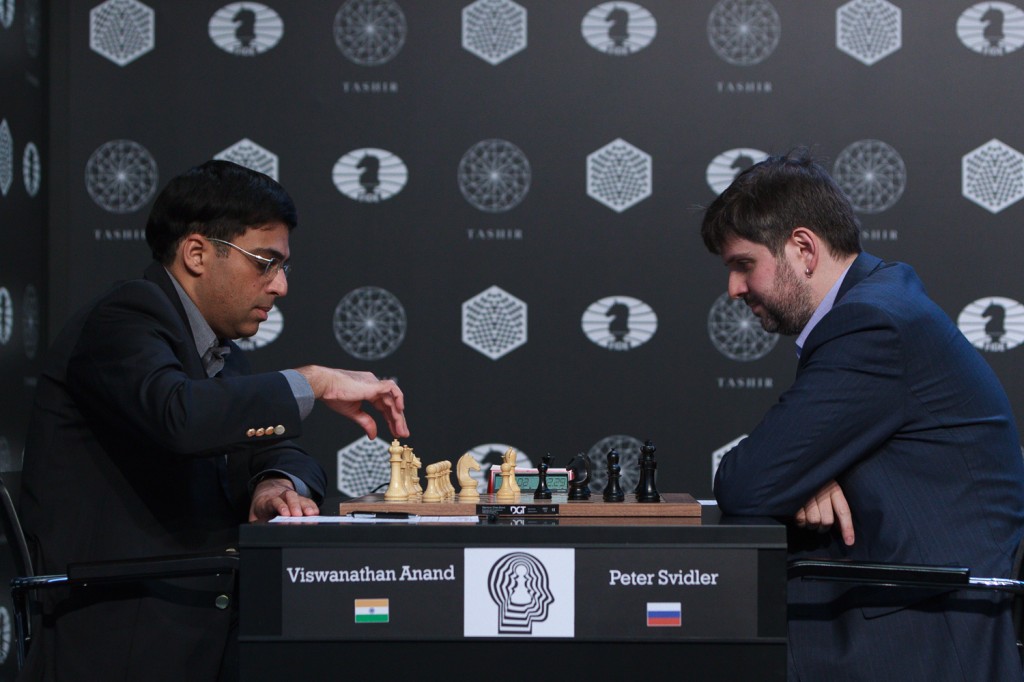 If Sergey Karjakin (Russia) wins the Candidates, this will be one game that everyone’s look back on as crucial – not because he won it, but because he did not lose it. Facing Fabiano Caruana (USA) with the Black pieces, Karjakin walked into a well-prepared line by Caruana. In trouble just after the opening, he went into a long think and then decided that his best chance lay in sacrificing his queen, albeit for a rook, a knight and a passed pawn. While the position was far from clear, it seemed that Caruana should be able to find a way to break through. But Karjakin’s defense held and then he found an amazing idea, sacrificing a knight to get his pawn rolling and then catching Caruana’s king in an awkward position in the corner. The upshot was that Caruana had to return the queen to achieve a position that he was actually probably a bit worse in at the end. But the players agreed to a draw. No doubt, Karjakin was thrilled with the result, while for Caruana, it had to be a bid disappointment. 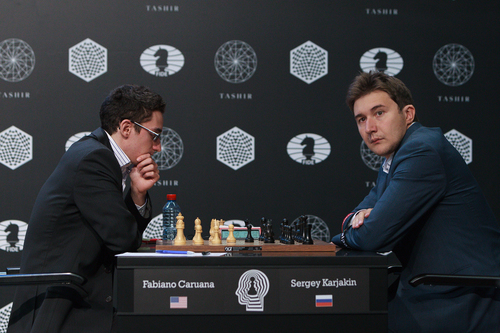 In the game between Veselin Topalov (Bulgaria) and Anish Giri (Netherlands), the Bulgarian essayed the aggressive, coffee-house move 3. h4. It had been played before, and even recommended as a surprise weapon by some strong players, but Giri is no ordinary player. He responded by turning the opening into a Benko Gambit, in which the move 3. h4 was not necessarily a good one. The game became one of attrition in which Giri gradually infiltrated Topalov’s position. But each time he seemed he might crack, Topalov found a resource. He finally lost a pawn in the endgame, but there was so little material left on the board, it made no difference and Giri finally allowed Topalov to sacrifice his last piece to eliminate his last pawns, thereby sealing the draw. 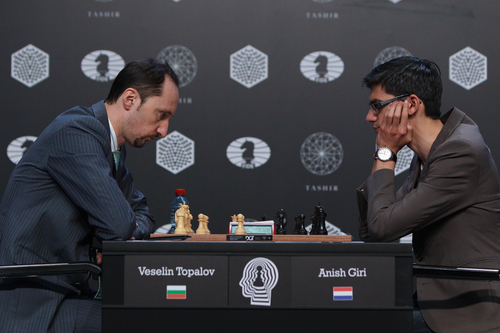 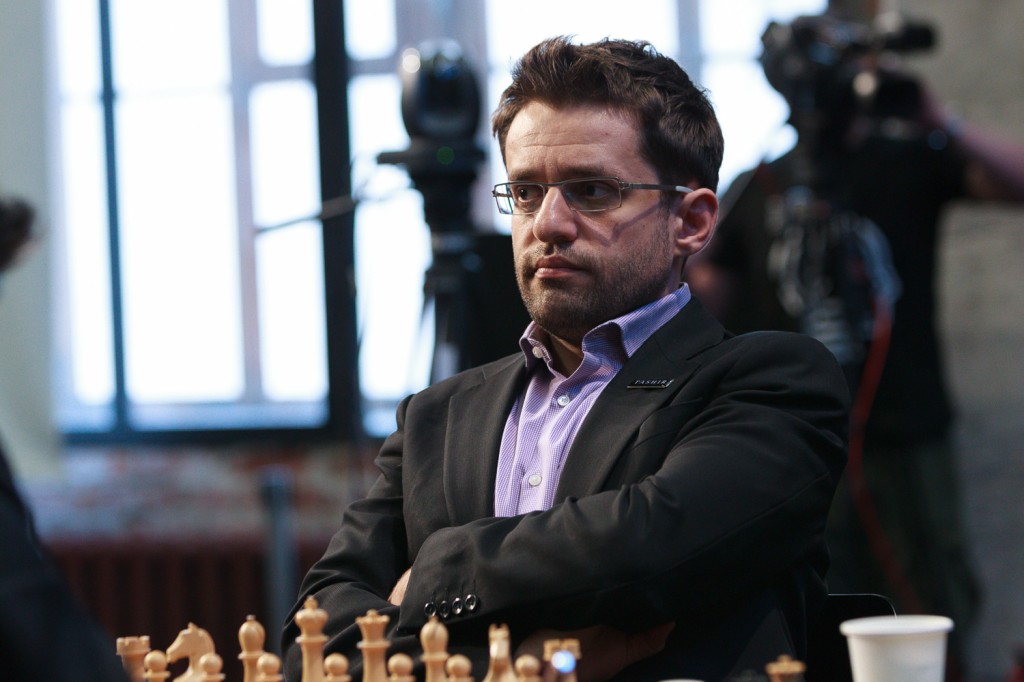 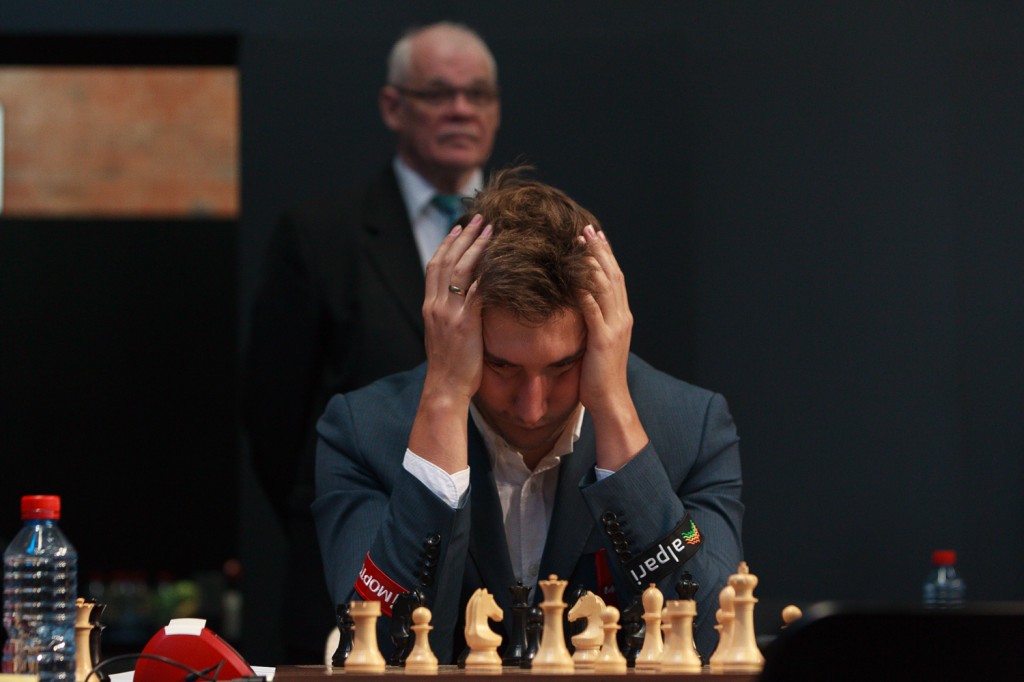