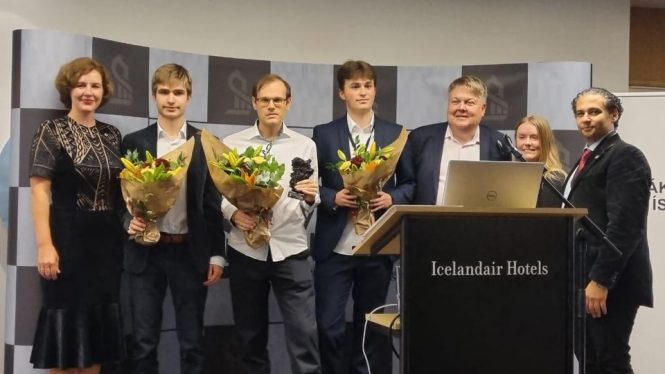 Demchenko drew as black in the last round against Deac Bogdan-Daniel to score 8.5 points. Meanwhile, 17 years old Keymer Vincent (GER, 2602) managed to build a winning position against Vocaturo Daniele (ITA, 2630) who made a decisive mistake in the endgame. With a decisive result in the last round, Keymer scored 8.5 points to share the top with Anton Demchenko.

Tiebreak criteria (average rating of opponents) decided that Demchenko Anton gets gold and Keymer Vincent the silver. Additionally, as the best Junior U20 player Keymer Vincent was granted the seat in FIDE Grand Swiss, according to ECU Board decision.

The best ranked 23 players of the Championship qualified for the next FIDE World Cup:

Besides regular prizes, also the special prizes for the best ranked Juniors, Seniors, Females and ACP players (who did not take a regular prize), were awarded during the Closing ceremony which took place yesterday evening.

Two Junior players tied for the prize of the best ranked Junior, scoring 7 points each. According to tiebreaks, Bjerre Jonas Buhl (DEN, 2550) was 1st Junior player to be awarded with special prize, Sokolovsky Yahli (ISR, 2415) was second and Horvath Dominik (AUT, 2455) was third with 6.5 points.

Ftacnik Lubomir (SVK, 2513) was the best ranked senior player with score of 6 points. Hillarp Persson Tiger (SWE, 2543) and Hjartarson Johann (ISL, 2519) had the same score, but tiebreak criteria decided that Ftacnik gets the 1st prize, Hillarp took the 2nd and Hjartarson was third.