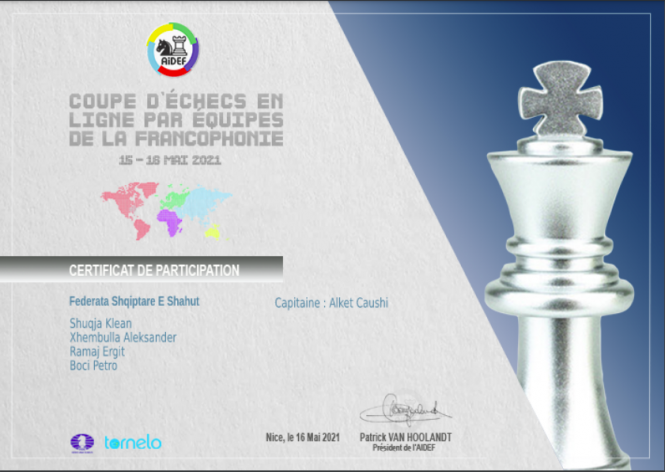 This tournament was reserved for amateur teams selected by their federation to participate in the tournament. In order to participate, the teams had to be affiliated with AIDEF and composed of at least one female, one player from -2000 ELO and three players from -1800 ELO.

Thirty teams from 4 continents took part in the tournament, which in itself is a great success!

On the first day, the organization was a little behind the original program due to some technical problems, team composition and incorrect email addresses, which the referees had to correct, but then everything went smoothly.

After the first day of competition, having won its first 5 matches, Albania led the tournament ahead of Morocco. But it was without counting on the Moldovan team which the next day overtook them at the end of the 10th round before starting the last match. The Moldovans had their destiny in their hands, but unfortunately for them, they lost against Canada, which finally allowed Albania to emerge victorious!

According to the usual procedure, the games will be analyzed and submitted for verification to the FIDE software of compliance with the fairplay rules and, unless otherwise, the podium of the final ranking is thus established as follows:

Congratulations to the winning team which consisted of 4 young players:

They will each receive a medal and a copy of the album “Chess in Art” and the Albanian federation a commemorative trophy.

This tournament will now appear in the annual calendar of competitions organized by AIDEF.

The awards ceremony, medals and trophies will be in presential during the closing dinner of the 8th edition of the “Rencontres Internationales des Echecs Francophones” at the end of 2021.

All the results and the complete ranking were published on Chess-results.

The Francophone Chess Association thanks all the players, the captains and the arbiters for their participation and gives you an appointment in two weeks for the “Championnat d’échecs en ligne par équipes de la Francophonie” which will be reserved for national teams with no ELO limit.