The Championship will be played as a 9 round Robin tournament, with time control 90 minutes for 40 moves plus 30 minutes for the rest of the game, plus 30 seconds increment for every move played starting from the first move.

Top three teams will be awarded with regular prizes, trophies and medals, as well as the Single board prizes for the best players of each board.

This year, the team of Luxembourg will be the defender of the title of European Small Nations Team Chess Championship.

The ECU President, Mr. Zurab Azmaiparashvili will visit the Championship and will attend the Closing Ceremony of the event.

All the information are available on the Official Website of the event. 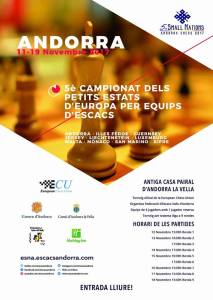