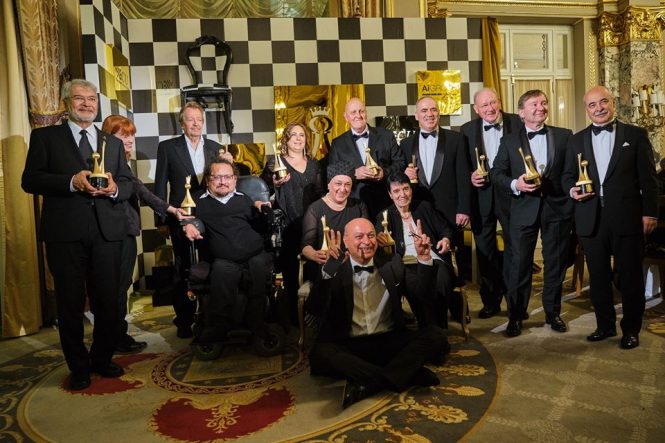 European Chess Union Board has decided to establish the annual award ceremony – “European Golden Pawn” – which will be held every year on the last Saturday of November.

First year of the award ceremony was dedicated to European legends and their achievements and the inauguration event of European Golden Pawn Award Ceremony took place on 30th November in the historical Hotel de Paris in Monte Carlo sponsored but the Georgian Industrial Company AiGroup.

Gala dinner and Ceremony were completed with music performances by Composer of the ECU anthem Nikoloz Rachveli; Carmen, Juga, Eliza Cipriani and Luca Condello and artists of NuArt, and special photo corner for all the guests of the Ceremony.

The Winners of the prizes are:

All the Winners received a special prize- trophy. The author of the prize is internationally renowned Georgian industrial designer Zviad Tsikolia, who is also famous for his brand TSIKOLIA. Zviad Tsikolia’s inspiration for the prize was the ability of a pawn to be promoted and transformed into a queen. The prize is a play, a sort of dance, between a pawn and a queen.

Georgian Industrial Company AiGroup – Diamond sponsor of the event, and its founder were awarded with the Andria Dadiani prize as the best sponsor /outstanding sponsor. The prize has been passed to Kakha Guledani, Chairman of the Board of Directors of the Company.

The ceremony was attended by the official representative of His Serene Highness, Prince Albert II of Monaco, adviser of His Serene Highness, the President of the World Olympians Association, President and Founder of Pease and Sport, President of the French Federation of Modern Pentathlon and Vice-President of the Union Internationale de Pentathlon Moderne – Mr. Joel Bouzou; President of the European Chess Union Mr. Zurab Azmaiparashvili; Secretary General of the World Tourism Organization Mr. Zurab Pololikashvili;  the Minister of Foreigner Affairs of Montenegro Mr.Srdjan Darmanovic; FIDE President Mr. Arkady Dvorkovich; the Chairman of the Board of Directors of the AiGroup Mr. Kakhaber Guledani and the representatives of the Georgian Industrial Holding AiGroup; former and famous footballer Predrag Mijatovic, officials of the ECU and FIDE Boards, Federations’ Presidents & Representatives, business, sports and art personalities.

Besides the main Award Ceremony event and gala dinner, European Golden Pawn comprised also an important side event a simultaneous chess exhibition by the legendary Garry Kasparov, with participation of 16 kids.

The event was LIVE broadcasted, as well as the side events, through the Facebook page of European Golden Pawn.

All the videos are available here.