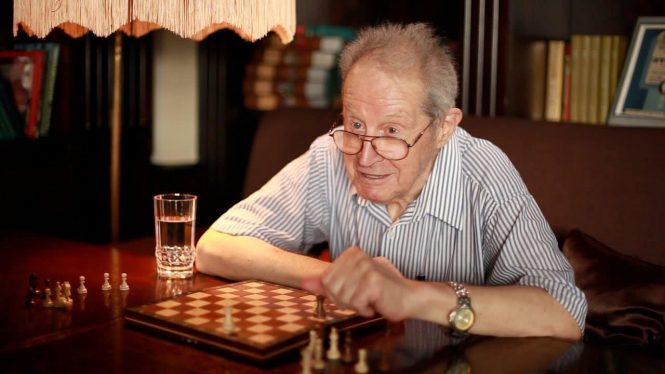 Only Grandmaster, who reached 100 years passed away in Moscow.

When I was twelve  I was lucky to buy one of the best endgame books! It was Yuri Averbakh three volumes endgame manual. I studied every position from the books! It was his main endgame evergreen work. I could never imagine in that moment ., that after 10 years my first win against Grandmaster will be against Yury Lvovich in the Soviet Semifinal! In endgame! It means, that his education was great.

In eighties, he modernized this work into five books, which are translated into different languages till nowadays! He established himself as one of the most important chess authors of the 20th century. Later he published great memoirs “Silence of the pieces”, “Chess behind the curtains” and “Life of chess player in the System”. Plus many manuals for children and one great book on the Karpov-Kasparov match in Merano 1981. For many years he had Chess school on Soviet TV. For more than 30 years he was a Chief editor of one of the best World Chess magazines “Шахматы в СССР” and “Шахматный Бюллетень”.

He was not just a prolific author, but a very famous Arbiter and Chess functioneer. From 1962 to 1992 he was Vice President and then President of the Soviet Chess Federation, Chairman of the few FIDE Commissions. He introduced a very important system against Kings Indian, which is named after him.

He was active as a second on top level , working with World Champions Mikhail Botvinnik and Tigran Petrosian. He was a Trainer of Soviet Youth Teams in 80ies on many training camps and Youth World Championships. I was lucky to be a member of these teams. I must say, that nobody else had such an honest attitude to the young generation, and his dinner talks to the team we all remember still! Such stories about great players and tournaments helped our generation simply to love chess more! He was a very warm person with a fantastic sense of humor. Averbakh himself called himself a fatalist.

He was top 10 player in 50ies, winning USSSR Championship in 1954 and qualifying for World Candidates Tournament in 1953. In his young years, he could not choose between chess and his engineer work. He graduated from one of the most prestigious and difficult technical Universities  MVTU in Moscow. Difficult war times 1941-45 he spent far from Moscow on the tank repairing factory.

Nobody else in the chess World was active on every level of chess!