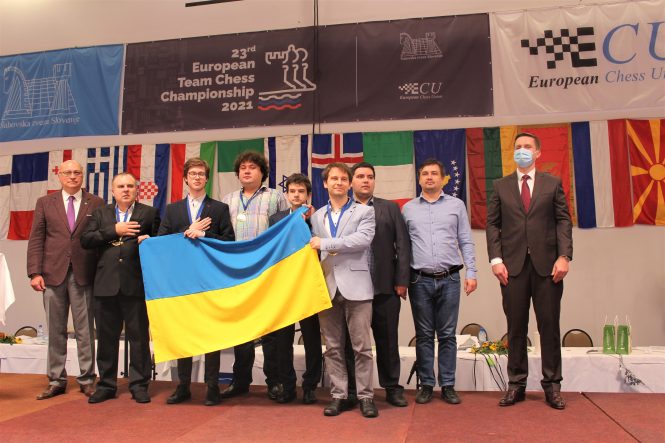 After intonations of anthems of Republic of Slovenia and European Chess Union, the ECU President Mr. Zurab Azmaiparashvili took a floor and addressed all the players with special congratulations to the Winners and Medalists.

Mr. Milan Brglez, the President of the Slovenian Chess Federation, expressed his pleasure that the event successfully concluded. He warmly addressed all the guests of the Closing Ceremony, participants and the Winners of the event with the message “Gens una sumus”.

The President of the Slovenian Parliament, Mr. Igor Zorcic, congratulated the Winners and emphasized that he is pleased to see Slovenia as a host of the biggest European team chess event.

European Women’s Team Chess Championship 2021 Winner and the runner-up were known before the last round of the event as Russia won the event with a round the spare, while Georgia secured second place. The final round decided only the bronze medalists.

Russia defeated the team of Poland to score absolute 18 match points, while Georgia took a victory against France for the final score of 15 match points. The President of Georgian Chess Federation and Ambassador of Georgia joined the Awarding ceremony of medals.

The team of Ukraine was victorious against Hungary with the final 3-1 result, scoring 12 match points to fight for the medal.

The final results can be found here.

After a dramatic finish in the Open event, where four teams: Armenia, Ukraine, France and Azerbaijan entered the last round fighting for the first place, Ukraine claimed gold thanks to the better tiebreaks than France.

Ukrainians convincingly won Armenia in the direct encounter for the top, with the 3-1 result, to have the final score of 14 match points. Korobov Anton was the first one to bring a decisive point for Ukraine, defeating Sargissian Gabriel on the first board. Volokitin Andrei beat Martirosyan Haik while Schevchenko Kirill and Hovhannisyan Robert, and Onyshchuk Volodymyr and Ter-Sahakyan Samvel agreed for a draw.

Firouzja Alireza brought the victory to the French team, as he overcame Mamedyarov Shakhriyar in a pawn-up rooks endgame after the boards 2, 3 and 4 ended their games in a peaceful manner. With this victory, Firouzja Alireza became the youngest chess player to cross 2800 rating aged 18 years and 5 months. Magnus Carlsen cross 2800 rating when aged 18 years and 11 months!

France scored 12 match points to join Ukrainians on the top, but tiebreaks decided that the team of France takes silver.

The teams of Poland and Spain tied for bronze, having the same score of 13 match points, each, but additional criteria was in favor of Polish players.

Poland crushed the Georgian team in the last round with 3.5-0.5 result to deserve the spot on the podium of Medalists.

Final standings can be found here.

The best individual players per each board were awarded for their performance with medals and gifts.

The final board lists of Open event can be found here.

The final board lists of Women’s event can be found here.

Photo gallery of the Closing ceremony