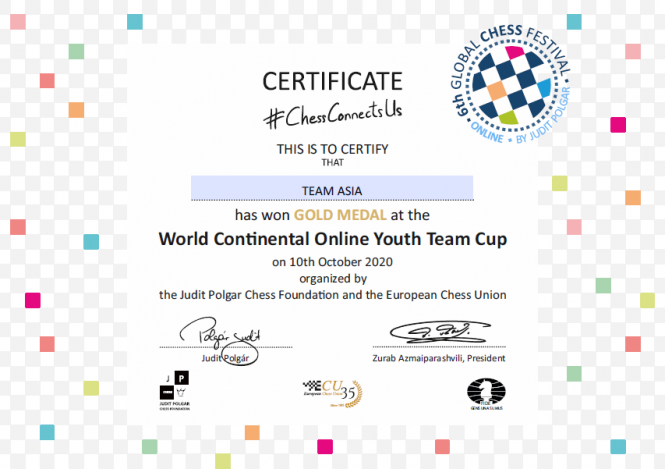 After 6 played rounds played through Tornelo Online playing server, the Winner of the event became Team of Asia, with score of 11 match points (5 victories and 1 draw).

All the results, pairings and Final Ranking Crosstable can be found here.

All 6 matches played in Round-Robin double matches system were LIVE Broadcasted through chess24.com page, as the official broadcaster of the event.

Congratulations to the Team Asia on becoming the 1st Intercontinental Online Youth Team Chess Champion and to all 64 players for participation and fair-play, who will as prize receive a Masterclass (1.5 hour) by GM Judit Polgar in two Groups of 32 players. Date and Time will be announced.

Shortly before the start of the first round today, the Opening ceremony took place Online, through the participants’ zoom call meeting. ECU Vice President, Dana Reizniece-Ozola, ECU Secretary General, Theodoros Tsorbatzoglou and Chairperson of FIDE Planning and Development Commission, Sonja Johnson, addressed and welcomed all the players and opened the event. Grandmaster Judit Polgar sent to participants the video message, which was played to them during the opening ceremony.